Animals can jump great distances, dodge predators and catch fast moving prey. How do they do it? They use their binocular vision to judge the distance in a millisecond. The question of how this works came to me from a curious Saskatchewan student:

"How do animals know how far away stuff is? How does a monkey’s brain know that if it jumps from one branch to another it won’t miss? I’m kind of like a monkey, so when I’m on the monkey bars at school how do I know I’m not going to miss the next bar?" ~ Anonymous Saskatchewan student, age 10

I thought this was a wonderful question, so I talked to the Nature Conservancy of Canada (NCC) science team to get an answer.

My favourite part of the question is that it correctly identifies the close connection between humans and monkeys. Humans are animals, so how we correctly judge the distance between things is almost entirely the same as it would be for a monkey. Just like humans, animals don’t have to do complex math equations to know the distance between two items; the brain does these calculations instantaneously.

The brain gets better with practice, so routine actions like walking become second nature. That is why your first time on the monkey bars is harder than your 100th time.

So how does the brain judge distance? The key for animals — like monkeys and humans — is in our eyes.

Have you ever wondered why most animals have at least two eyes? Why there are no cyclopses? Because to be able to properly judge distance you need binocular vision. “Bi” means two, and having two eyes allows our brain and eyes to create 3-D vision. 3-D vision is created because our eyes are in slightly different places on our head, so they each have a different view. Where these different views overlap is how the brain is able to calculate the difference in distance and to judge depth.

This happens because the closer an item is to you, the greater the relative difference between the eyes will be compared with the object. The farther away an item is, the smaller the relative distance between the eyes will be. Our brain is great at remembering patterns, and it remembers the differences that each eye is seeing and correlates it with a distance. It can also find the distance by calculating the “convergence,” or how crossed your eyes become while looking at something. The more crossed your eyes become when looking at an object, the closer the object. 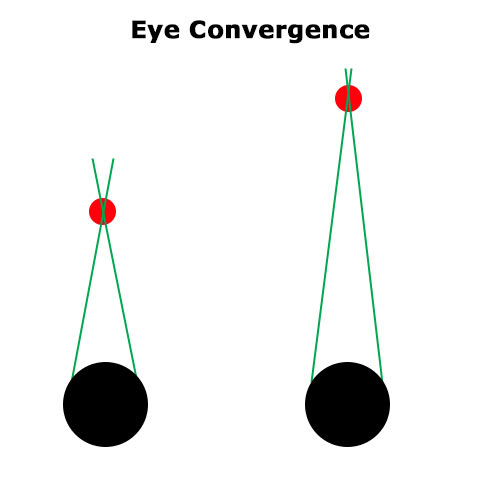 For predators, 3-D vision is essential to being able to quickly attack fast-moving prey in just milliseconds. The reason why predators have eyes on the front of their head is that this creates a large overlap between the eyes — creating 3-D vision. This is why wolves and eagles have excellent 3-D vision. Without it, an eagle would have a hard time spotting prey and an even harder time judging the distance needed to swoop down and catch it. Not all animals need excellent 3-D vision though. Animals that don’t rely on catching prey, like deer and rabbits, don’t need good 3-D vision. Instead, because they rely on static food (food that doesn't move, such as a plant), their eyes can be on the sides of their head. This means that the overlapping views from their eyes are much less. While this results in poor 3-D vision, they can see almost behind their head, making spotting predators much easier. Many grazers, like deer and horses, have a 350-degree field of vision. Only a small portion of their vision right behind their head is obscured.

You can do an experiment to show how 3-D vision works right from where you are sitting. If you rapidly alternate blinking your eyes while looking at an object up close, you can see that it jumps around in your vision.

Now, if you look at an object that is farther away while doing the same thing, you’ll notice that it moves a lot less than the closer object. This is what the brain is looking at all the time. It is learning how far an object is depending on how much the object moves from side to side in your vision. You can only see this movement when you close your eyes alternately, but your brain sees this difference all of the time.

Some animals actually give themselves an advantage by bobbing their heads back and forth. This allows a greater overlap between the vision of the eyes, which allows for an easier distance calculation in the brain. Owls are known for bobbing their head because their eyes don’t move on their own. Without being able to move their eyes, owls cannot cross them, which means they cannot use convergence to find distance. When they bob their heads, they mimic convergence. Not all animals use binocular vision to judge distance though; some use echolocation instead. Animals like bats send out a call that bounces off an obstacle and then comes back to the bat’s ears. The longer the signal takes to return, the farther away the obstacle is.

Binocular vision is one of the most important tricks your eyes use to gauge distance, but it isn’t the only one. Especially for items over 20 feet away, the brain uses movement and the known size of items to estimate distance. These other tricks of the brain allow animals to still be able to gauge distance, in a diminished capacity, if they lose an eye. For most animals though, binocular vision remains one of the most important ways in determining distance.

The animal kingdom is an incredible place that evolves amazing adaptations to solve problems. Binocular vision has evolved to be a great way for animals to judge distance. So now you understand how your brain knows where the next monkey bar is. And you may be able to blame your eyes if you miss the next bar!

Thanks to NCC's science staff for helping answer a great question!

Note: All animal eyes are different, so although predators generally have excellent 3-D vision and prey animals have good surround vision, this will be more or less true depending on the species and even the individual animal.