Come together: A week-long bioblitz adventure at Big Trout Bay On any given day, the Nature Conservancy of Canada’s (NCC's) spectacular 2,500-acre (1,012-hectare) Big Trout Bay Nature property, on the north shore of Lake Superior, is home to hundreds of species of plants, insects, birds and land animals.

But for one week last July, the reserve’s rocky shorelines, steep cliffs, thick forest and secluded wetlands played host to a new, visiting life form: a mini-armada of scientists from the Royal Ontario Museum (ROM), the Ontario Ministry of Natural Resources and Forestry’s (MNRF’s) Natural Heritage Information Centre and NCC. 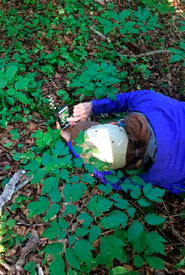 The team of more than a dozen botanists, zoologists, entomologists, ornithologists and other naturalists were conducting an intense, seven-day science bioblitz on NCC’s Big Trout Bay property. As noted in the main article, it was one of 10 such surveys of species biodiversity, one per province, conducted this year under the Canada BioBlitz 150 program.

Readers may be familiar with shorter, one-day or weekend scientist-guided bioblitzes involving the public. Intense science bioblitzes are different. They are tactical, scientist-only activities with a simple yet challenging goal: to comb through as much of a property as possible, identifying, cataloguing and, in some cases, sampling every species encountered.

While Big Trout Bay was chosen for the Ontario blitz in part because NCC wanted an inventory of the property’s natural heritage to draw up an effective management plan, just as importantly, the site fit the criteria of the science bioblitz planning team. “We were looking for a location in the far northwest of the province that nobody has inventoried,” says Deborah Metsger, assistant curator, natural history, at the ROM and a national bioblitz coordinator. This location — accessible, at times occupied, but largely undisturbed and undocumented by natural scientists — was an ideal spot.

Each day had a similar routine: the team would assemble on the property shortly after sunrise, then head out — on foot or in an MNRF motorboat — to different, pre-selected sites where the features and habitat might yield the most promising bounty of insect, plant or mammal. In the evening, each team returned to a temporary lab where they would process and catalogue the day’s finds. Some of the samples were also stored for later examination (of DNA and other telltale markers) and identification by other experts. 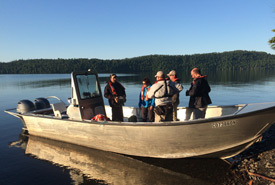 I was on hand for the first two days to see the property and to observe the bioblitz in action. Here’s a segment of my diary from the first morning in the field:

Our second day at the Big Trout Bay reserve — the first full day of bioblitzing — dawns cool and clear. The research work begins with a 7 a.m. rendezvous at a public boat launch on a small local conservation area just east of the NCC property. There, a two-man crew from the MNRF is on hand with a sturdy, dual-engine aluminum outboard, ready to ferry scientists — grouped into teams of two or three by taxon — to various shoreline drop-off points around the reserve. Between trips, they’ll start setting nets to collect samples of fish in the waters that surround the reserve.

Two of the teams — one out to catalogue vascular plants, mosses and lichens; the other to identify and collect insects — have decided to start the day on the steep south-facing slopes of McKellar Point, a long, forested finger of cliffs and cobble beaches extending east out into the lake [Superior]. On a windy day, bringing a boat into shore on the point’s exposed southern flank would be impossible. But this morning, with the water like glass, it goes without a hitch. The insect catchers make the first trip, and then the plant crew follows. Out over the water, a juvenile bald eagle beats its way west, heading somewhere down the point.

Within minutes of landing, both groups start making their way into the woods. They’ll ultimately rendezvous on a long, exposed, “raised” cobble beach in the middle of the forest 25, metres above the current shoreline — a relic from a time perhaps 2,000 years ago when the lake level was that much higher.

Metsger and another ROM colleague, Kevin Seymour, are the plant specialists. Their eyes dart to and fro over the ground as they slowly advance, stopping frequently to examine wildflowers and bits of greenery, take photos and tuck samples into plastic bags. While their job is to inventory everything, they’re keeping a special eye out for “Arctic-alpine disjuncts.” As Metsger explains: “In this area we’re kind of at a juncture point where prairie remnants come in, Arctic-alpine plants reach their lowest limit and southern species reaches their northern limit.”

On insect patrol, the work is split between collecting bugs on the fly while also setting a series of practical, colourful traps that they’ll come back to later and gather up samples from. “Some of these will be easily identifiable; other stuff we’ll send out to other taxonomic experts,” says Colin Jones, an arthropod zoologist with the Nature Heritage Information Centre. Jones, like Metsger and Seymour, stresses the unique opportunity this NCC site represents for their research. “So many of the other provincial bioblitzes are in southern Ontario,” he says. While the overall insect diversity is likely to be lower here than in the south, “there hasn’t been all that much insect work done here. We really don’t know what to expect.”

By week’s end, the group had logged well over 500 unique species of plants and animals. Subsequent follow-up lab work and sample testing has since brought the total to more than 630.

The tally includes a handful of the “disjuncts ” that the team had hoped to find. Among the plants, Metsger says they found several Arctic-alpine disjuncts — Laestadii's saxifrage, common butterwort, northern knotted pearlwort and alpine bistort — growing on the property’s cliffs and headlands.

In the water, meanwhile, Mary Burridge, assistant curator of ichthyology at the ROM, reports that sampling in Lake Superior yielded at least two highlights: a deepwater sculpin and a pygmy whitefish.

“Both of these species have similar, but unusual and disjunct, distributions, as they occur much more commonly in western Canada and up into Alaska,” Burridge says. “The pygmy whitefish...is a new distribution record of this species for the ROM. We do have several specimens...in our collection from deepwater lakes in northwestern Ontario, but not from Lake Superior until now.”

Threatened species are of great interest to both NCC and the bioblitz team, of course. On that front, new information on species that are assessed as at risk, including peregrine falcon and pygmy whitefish, will help in their conservation.