As well as protecting nature, urban conservation is important for connecting the 80 per cent of Canadians that live in cities to nature. (Photo by Scott Web)

Recently, the Nature Conservancy of Canada (NCC) invited Canadians to join the discussion on NCC's Facebook page to help pick Toronto's top 10 nature hot spots. These hot spots are the most important areas for rare species and habitats, migrating birds and the amazing variety of life that nature still offers.

Based on the public's suggestions and information from a variety of sources and databases, including Important Bird Areas, iNaturalist, eBird and the Global Biodiversity Information Facility, NCC developed a list of the top 10 nature hot spots around the city. These are places that not only play an important role in nature conservation within the city but also from a Canadian and even global perspective. The list was revealed on October 8 at NCC's NatureTalks speaker series event at Toronto's Design Exchange, which featured a conversation and insights from scientists, artists and thought leaders about why rediscovering nature in our cities can change the quality of our urban lives and the future of biodiversity conservation across Canada. 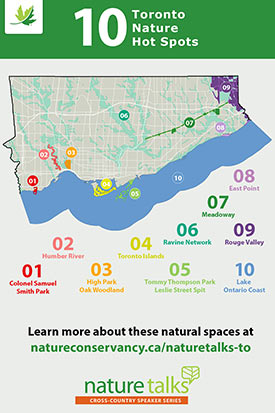 Tommy Thompson Park/Leslie Street Spit extends from the Toronto shoreline about five kilometres southwest into Lake Ontario. It is constructed from rubble dumped from building demolitions in the city. This fill has naturally become revegetated with cottonwood, willows and meadows and has also been actively restored by the Toronto Region Conservation Authority. The natural area is now approximately 63 hectares (156 acres).

It has been designated as an Important Bird Area of global and continental significance because of large breeding colonies of black-crowned night heron and ring-billed gull. The number of herons, however, has decreased as other colonial nesting water birds, particularly double-crested cormorants, began using the area. The colony of ring-billed gulls is one of the largest in the world. 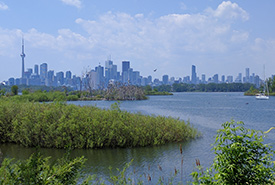 This site is also a birding hot spot, with 305 recorded species; more than anywhere else in Toronto. These records include observations of large numbers of migrating songbirds and shorebirds. Endangered Blanding's turtles have also been documented.

This site will be enhanced with the proposed restoration of the mouth of the Don River. This project will add one kilometre of new river channel and 18 hectares (45 acres) of new coastal wetland and upland habitat, plus associated aquatic habitats. 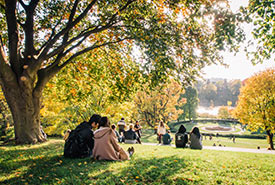 Canada’s first Urban National Park, the Rouge Valley is the largest natural area in Toronto and extends into Pickering and Markham. It has been identified as a key site to protect nature in southern Ontario’s “Carolinian Canada” zone and provides habitat for many species at risk, including the globally vulnerable redside dace. 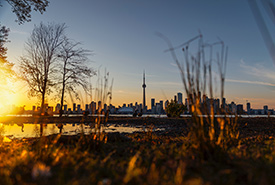 The rich and diverse habitat of the nearshore waters of Lake Ontario have seen a resurgence of fishes and waterfowl as water quality has improved. In the winter, huge flocks of thousands of sea ducks can be seen. This includes greater scaup, redhead and long-tailed duck, which has recently been assessed as vulnerable on the International Union for Conservation of Nature Red List of Threatened Species. The endangered American eel has also been found in the city’s nearshore waters. This fish makes one of the most spectacular wildlife journeys in the world. The individuals living in Toronto’s waters will one day migrate thousands of kilometres to the Sargasso Sea in the Atlantic Ocean. 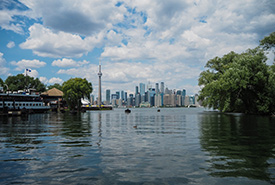 The Toronto Islands include about 40 hectares (99 acres) of natural habitat that support globally rare habitats and endangered species, including the Great Lakes dunes and the wet meadows that can be found at Hanlan’s Point Beach. In 2018, a pair of endangered piping plovers successfully raised chicks on the Toronto Islands for the first time since 1934.

The Toronto Islands are a well-known migratory bird stopover. Thousands of barn swallows, blue jays and red-winged blackbirds have been observed on a single day during migration.

East Point is almost 50 hectares (124 acres) and is located at the eastern end of Scarborough Bluffs, where the bluffs intersect with the old Lake Iroquois shoreline.

A small remnant of tall grass prairie that includes big bluestem and switch-grass can still be found here. The prairie also includes a large population of the threatened dense blazing star, although the origin of this population is uncertain. As with several other sites along Lake Ontario, East Point is a staging area for monarchs during their migration. Over 1,000 dunlins have been seen resting on the break wall during migration. 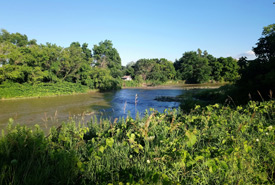 Part of the Humber River (Photo by Adam Hunter/NCC staff)

The Humber River flows from the Oak Ridges Moraine to Lake Ontario. Within Toronto, the river mouth and adjacent natural vegetation upstream to Lambton Prairie Park and Lambton Woods harbours several rare species and habitats. These habitats include coastal marshes, tall grass prairie and oak woodlands. The prairie and woodland habitats support a small population of wild lupine, and the endangered Blanding’s turtle has been documented from the coastal marsh.

The Lake Ontario population of Atlantic salmon is being reintroduced to the Humber River. This fish swims up rivers to spawn and was once common in Lake Ontario but was extirpated (locally extinct) by 1900.

Similar to the Leslie Spit, much of Colonel Samuel Smith Park is a naturalized area that was created on an artificial spit that extends into Lake Ontario. The site is approximately 50 hectares (124 acres) and is naturalized with open meadows, shrub thickets and wetlands. The shoreline includes rocky areas, cobble beaches and coastal wetland.

Colonel Samuel Smith Park is one of Toronto’s birding hot spots. Over 280 species have been observed, including sightings of thousands of dunlin, whimbrels and semipalmated sandpipers in a single day.

At over 200 hectares (494 acres), The Meadoway will eventually become one of Toronto’s largest natural areas and provide important habitat for declining grassland birds and pollinators, including monarchs.

This new and on-going restoration project is transforming a large corridor of mowed grass under a 16-kilometre-long hydro corridor to meadow and shrub thickets. Approximately 40 hectares (99 acres) have been restored to date. The Meadoway will be the largest east-west corridor in the city.

Toronto’s ravine network is over 4,452 hectares (11,000 acres) and makes up 17 per cent of the city, This makes it one of the largest urban natural areas in the world. Almost 90 per cent of the city’s environmentally sensitive areas intersect with this network, and 60 per cent is publicly owned.

The ravine network is centred around four major watersheds: the Humber, Don, Highland Creek and Rouge. These ravines are important corridors for moving water and wildlife through the city, including migratory songbirds. The biodiversity of Toronto’s ravines has been greatly impacted by habitat loss and invasive species. Key actions to restore the ravines have been identified in the Toronto Ravine Strategy.

To learn more about NatureTalks and to register for upcoming NatureTalks events, click here.