Cities have traditionally been considered separate from nature. But recent studies have shown that cities can provide important habitats for some species, such as pollinators. Over 100 species at risk can be found in Canadian cities, and several are now almost restricted to these urban environments.

Nature and green spaces in cities also provide significant ecosystem services, including holding back flood waters, cooling the atmosphere and removing air pollution, and have significant economic value. The urban forest in Vancouver provides $224 million of ecological services each year (TD Economics 2014). Urban conservation is also important for connecting to nature the 80 per cent of Canadians who live in cities. Truly, these natural spaces are gems for many reasons.

The Nature Conservancy of Canada (NCC) has identified top 10 nature hot spots in Vancouver, based on suggestions from the public and information from a variety of sources and databases, including regional studies, Important Bird Areas, iNaturalist, eBird and the Global Biodiversity Information Facility.

Nationally and globally imperilled species and habitats, wildlife and ecological corridors can be found at these hot spots. Not only are these places important for wildlife, they are accessible to urban residents and help rekindle or enhance their bond with nature, contributing to the quality of life in our cities. 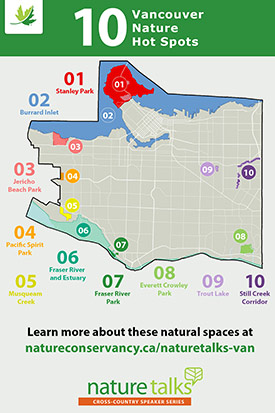 The 10 nature hot spots in Vancouver represent a wide variety of important species, habitats and ecological functions. The city’s main natural areas are associated with the marine, freshwater and coastal habitats of Burrard Inlet and the Fraser River. Both of these areas are of global importance for birds, marine mammals and fishes. By far the largest terrestrial hot spot within Vancouver is Stanley Park. Two of the other hot spots are creeks that, after decades of degradation, are being restored and support small populations of salmon and trout. Many of the other hot spots are small areas, but they still contain important plants, animals and habitats. Conserving and restoring these sites will benefit many species and have a significant and long-term impact on nature in the city. Stanley Park is the largest and most diverse natural area in Vancouver. Habitats range from old-growth forest to tidal pools. Over 240 different species of birds have been found, more than anywhere else in Vancouver, including one of the largest urban great blue heron nesting colonies in North America. Several species at risk have been documented here, including Johnson’s hairstreak, a globally imperilled butterfly. Northern red-legged frog, a species at risk in Canada that was once found in Stanley Park’s Beaver Pond, now appears to be extirpated (locally extinct). Burrard Inlet is one of the most recognizable features in Vancouver. As part of the larger Georgia Basin region, Burrard Inlet is one of Canada's most productive marine ecosystems, with habitats that range from kelp beds to tidal pools to newly restored salt marshes. Marine mammals that occur in the inlet near Vancouver include California sea lion, steller sea lion and orca. Burrard Inlet is also part of a globally significant Important Bird Area because of its large congregations of western grebe, Barrow's goldeneye and surf scoter. The extensive mudflats, particularly at the Spanish Flats, provide important habitat for migrating shorebirds. Jericho Beach is known for its sandy beaches on English Bay, but it also features habitats with alder thickets, marshes and freshwater ponds. Several nationally at-risk species have been seen. Jericho Beach is also a birding hot spot, with over 235 different species observed. A major restoration project in 2013 restored beach areas that provide habitat for shore-spawning marine fishes, such as Pacific sand lance and surf smelt. This 763-hectare (1885-acre) park with over 50 kilometres of trails is mostly outside of the city, but a small area intersects with the urban boundary. There are a wide diversity of habitats, including second-growth forest, abandoned pastures, streams and the Camosun Bog. Several Canadian species at risk can be found here, including the endangered Roell's brotherella moss and Pacific water shrew. Over 150 bird species have been observed.

Musqueam Creek is Vancouver’s last wild salmon stream supporting runs of wild coho, chum and cutthroat trout. Within the city, the creek flows through the 22-hectare (54-acre) Musqueam Park. In addition to salmon and trout, the creek corridor provides habitat for species at risk, including northern red-legged frog and Pacific water shrew. There are on-going efforts to restore the stream by the City of Vancouver and the Musqueam First Nation.

The Fraser River and Estuary is a large complex of interconnected marine, estuary, freshwater, urban and agricultural habitats. The estuary is a globally significant Important Bird Area because of its high numbers of waterfowl, seabirds, shorebirds and waterbirds. The northern boundary of the Important Bird Area runs along the Fraser River on the city’s southern boundary, and includes Musqueam Marsh, the largest estuary habitat in Vancouver. The intertidal mud and sandflats are part of the Western Hemisphere Shorebird Reserve Network, where flocks with tens of thousands of shorebirds have been observed. The river supports critical populations of at-risk fishes, including white sturgeon, eulachon and Chinook salmon.

This nine-hectare (22-acre) park on the Fraser River includes tidal flats, alder thickets and a restored wetland. The wetland provides habitat for the globally vulnerable Henderson's checker-mallow. The Canadian range of this colourful wildflower is restricted to estuaries and tidal flats in southwestern BC. Over 120 different bird have been observed in the park.

At over 38 hectares (93 acres), Everett Crowley Park is one of the largest forested areas in the city and is part of a larger natural system that is connected to the Fraserview Golf Course. The park area has a long history of disturbance. Much of it was a landfill that operated until the late 1960s, and Avalon Pond is an old pit from mining sand and gravel. Since the early 1990s, the park has been a focal area for ecological restoration. It is now one of Vancouver’s birding hot spots with 120 species observed, and there has been a recent observation of the at-risk northern red-legged frog. Trout Lake is a small freshwater lake located in John Hendry Park. The shoreline marsh and bog around Trout Lake provide habitat for Vancouver Island beggarticks, a globally rare plant. One hundred and sixty bird species have been observed, including at-risk species such as band-tailed pigeon and black swift. Several ecological restoration projects have been completed and more are proposed to improve the water quality in the lake.

Still Creek is an urban watershed shared by in the cities of Vancouver and Burnaby and has been heavily impacted by development and water pollution. In 2012, for the first time in almost 80 years, coho salmon returned to the creek after over a decade of stream enhancement projects. The Still Creek Corridor also includes the Renfrew ravine, a nine-hectare (22-acre) forested ravine with older growth forest. The Vancouver portion of the watershed is part of the headwaters of Burnaby Lake, which provides habitat for the threatened Pacific coast population of the western painted turtle.

To learn more about NatureTalks and to register for upcoming NatureTalks events, click here.