An unmistakable bird on the grasslands, the male bobolink’s plumage resembles a tuxedo worn backwards. The male’s call is a bubbly, tinkling song with sharp notes sung both from perches and during aerial displays.

This medium-sized songbird has one of the world’s longest migrations, travelling over 20,000 kilometres between their wintering grounds in southern South America and their breeding grounds in southern Canada and northern U.S. each year. To navigate this long-distance journey, bobolinks rely on their built-in compass — bristles in the tissues of their nasal cavity that contain iron oxide — to orient them to the Earth’s magnetic fields.

Breeding male bobolinks have a black back with a white front and rump and a yellowish nape. Females and non-breeding birds are light beige, with streaks of dark brown on the back and flanks. The conical-shaped bill of this species is designed to extract seeds and forage for small grains and insects.

Bobolinks molt their feathers twice a year. By end of summer, male bobolinks undergo a complete makeover, molting to resemble females or non-breeding birds. On their wintering grounds, the males molt once again to eventually grow back the striking black, white and yellow breeding plumage. 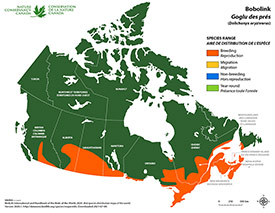 Across southern Canada, bobolinks breed in prairies, meadows, hayfields and other grassland habitats.

After bobolinks have bred, they move to freshwater marshes and coastal regions in the southern U.S. to molt before taking flight to migrate to their wintering grounds, where they take up their lives in grasslands, marshes, rice fields and sorghum fields.

The bobolink is assessed as threatened in Canada by the Committee of the Status of Endangered Wildlife in Canada and listed under the Species at Risk Act.

Bobolink populations are declining because of the loss of prairies and other grasslands habitats. Their use of hay fields for nesting can make them vulnerable to accidental mortality during harvest before the end of the nesting season (generally before July 1). Habitat loss and fragmentation is the key threat for this species. Pesticide use on their wintering grounds may also be contributing to their decline.

The Nature Conservancy of Canada (NCC) actively conserves habitats for grassland birds, including the bobolink, which require prairies, savannah and other grassland habitats to survive.

In Ontario, this species can be spotted in the Rice Lake Plains and MacMillan Nature Reserve, where we are restoring native grassland and savannah habitat. In Manitoba, it can be seen on NCC’s Jiggens Bluff, Tall Grass Prairie Preserve and Fort Ellice properties. In Saskatchewan, the bobolink is found on NCC properties such as Mather Lake, Big Valley and Shoe Lake West, as well as in the East Parklands Natural Area. On NCC properties with agricultural lands, haying is delayed until after July 15 to allow the birds the opportunity to finish nesting. In British Columbia, this charming bird inspired the naming of NCC’s Bobolink Meadows Conservation Area, which protects some of the most significant bobolink breeding habitat in the Okanagan Valley.