The burrowing owl is easily recognized by its long legs, short tail and small size, and can often be found standing on fence posts or on the ground foraging for mice, grasshoppers and other insects.

It arrives on the prairies in April, with new owlets emerging from burrows in late June and early July before migrating to wintering grounds in the southern United States and Mexico in September.

Where do burrowing owls live? 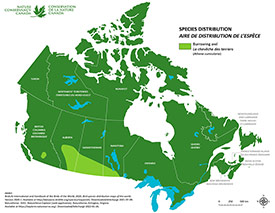 The owl receives its name from its characteristic habit of using abandoned burrows of mammals such as prairie dogs and badgers in which to build its nest. It requires short vegetation and permanent cover around burrows, but relies on thicker stands of grasses for foraging. Because of the owl's need for different types of cover, pastureland grazed in varying intensities is needed for this species' survival.

With fewer than 1,000 breeding pairs of this endangered prairie species remaining in Canada, the burrowing owl is listed as endangered. The Canadian Wildlife Service predicts that, unless its declining population trends are reversed, the burrowing owl will be extirpated (locally extinct) within a few decades.

NCC's work in conserving key nesting habitat in the Missouri Coteau and in Alberta's Sage Creek Uplands is ensuring that this owl has a fighting chance at survival.

In the summer of 2011, burrowing owls were also confirmed to have returned to NCC's Old Man on His Back Natural Area, signalling the health of this ecosystem.