The cerulean warbler is an evasive bird. It is often heard but rarely seen, because it lives in the tops of the tallest trees. Here, it flits from branch to branch as it forages for food. Each time the late Dr. Henry Barnett visited the Happy Valley Forest (HVF) and heard this species' distinctive buzzing call, he would remember the day he caught a glimpse of its white belly and black necklace.

"He and his friend were lying on their backs and scouring the canopy till they finally saw the male. I think the canopy was not quite leafed out, so they were lucky," recalls Dr. Barnett's daughter, Ann Love, who  heard the story many times on hikes through the HVF with her father. She has seen cerulean warblers as they congregate for summer migration. But she has never been fortunate enough to spot one in its treetop nest.

Cerulean warblers are listed as vulnerable on the International Union for Conservation of Nature's Red List and as endangered in Canada. In the second half of the 20th century, they experienced the largest population decline of any North American wood warbler. 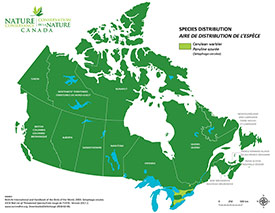 This tiny bird nests throughout the northeastern United States. In Canada it is found only in Ontario and Quebec. There are estimated to be between 500 and 1,000 breeding pairs in Canada. The majority breed in Ontario, primarily in the Frontenac Arch. Each fall, these warblers migrate to their wintering grounds in the forests at the base of the Andes Mountains in South America.

Like many species, the cerulean warbler is threatened due to the loss of suitable habitat through forest fragmentation. Habitat loss in its wintering areas in South America and the loss of migratory stopover sites in Central America are also threats. The species therefore benefits from shade-grown coffee plantations as opposed to traditional plantations.

The Nature Conservancy of Canada (NCC) is working to protect habitat for cerulean warblers throughout Ontario, including the Frontenac Arch, Southern Norfolk Sand Plain, Skunk's Misery and the Happy Valley Forest, where Dr. Barnett not only donated land to NCC, but was a driving force behind convincing other landowners to donate their properties to NCC for conservation purposes.