The loggerhead shrike, one of the fastest-declining bird species in North America, is a unique songbird. Canada has two subspecies — the prairie subspecies occurs in Saskatchewan and Alberta, and the eastern subspecies in Ontario and Quebec. The range of both overlaps in Manitoba. Don’t be fooled by its delicate appearance, though; the loggerhead shrike hunts like a bird of prey.

This songbird gets its name from its disproportionately large head that sits atop a small, delicate body. Similar to its cousin, the northern shrike, the eastern loggerhead shrike has a raccoon-like eye mask, grey back with black wings, white underparts and a small hook at the end of its bill. While both possess similar traits, the loggerhead shrike is distinguished by its wider eye mask, which covers both the entire eye and its bill, and a completely white underside with no markings. 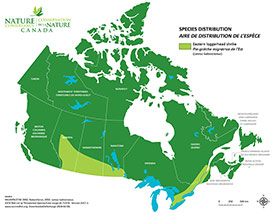 Eastern loggerhead shrikes are migratory, wintering in the southern United States. Each spring, they return to Canada to breed in the grasslands of southern Ontario, Quebec and Manitoba. In these grasslands, they prefer to use trees with thorns, including hawthorns, to rear their young and take apart their prey.

Using its strong, hooked beak, the eastern loggerhead shrike cracks the skull or pecks at the neck of its prey — usually small mammals, insects and other birds — to deliver a fatal blow. As the shrike does not possess the strong grasping talons of a raptor, it cannot hold its prey while it eats, so it has a creative solution to this problem. Using the sharpness of thorns and barbed wires as a “skewer,” the shrike can hold its prey in place while eating or leave the critter there for future consumption.

Loss of grassland ecosystems through natural succession and continuous human impact — in the form of climate change, agriculture and use of pesticides — have destroyed many grassland habitats that the eastern loggerhead shrike depends on in Ontario, Quebec and Manitoba. In Canada, there are now less than 110 adults of this subspecies.

The Committee on the Status of Endangered Wildlife in Canada has assessed the eastern loggerhead shrike as endangered in Canada.

At the Scheck Nature Reserve and Carden Alvar, Wildlife Preservation Canada, with support from NCC, has been coordinating captive breeding and release programs since 2003, which has resulted in the release of over 800 shrikes. Additionally, NCC helps in population monitoring, public education and land stewardship to guarantee a healthy and sustainable habitat for these future generations of eastern loggerhead shrikes.