One of Canada’s most recognizable owls due to its snowy-white plumage, the aptly named snowy owl is an enduring symbol of Canada’s North. Surprisingly, unlike most other owls, the snowy owl is diurnal (active during the day) rather than nocturnal. This bird of prey is a great judge of distance, which allows it to swoop down and catch its prey. The circle of feathers surrounding its eyes helps reflect sound to its ears; a feature that comes in handy when vision is limited.

Adult male owls are usually pure white in colour, while females are darker with feathers barred with dark brow.  At nearly half a metre tall, with a wingspan of almost 1.5 metres, the snowy owl is one of the larger North American owls. 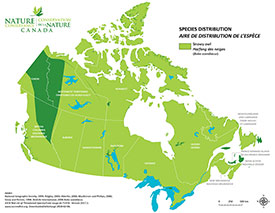 These northern-dwelling birds are found year-round in the Arctic regions of North America and Eurasia. During breeding season, they can be spotted on the tree line of northern Canada, in the high, rolling tundra with tall points of land for nests and perches. Some may also cross the Atlantic Ocean, to migrate between Russia and Canada. The Nature Conservancy of Canada’s (NCC’s) stewardship staff have spotted these birds on many of our properties, such as pointe Saint-Pierre in the Gaspé Peninsula Coastal Habitats Natural Area in Quebec.

Arctic hares, ptarmigan, foxes and seabirds all make up this predator’s diet. However, lemmings are their preferred prey. Snowy owls swallow their smaller prey whole and must capture the equivalent of seven to 12 mice a day to meet their food requirements.

While the snowy owl is not an at-risk species, it still needs safe places to land and feed. The Nature Conservancy of Canada (NCC) works to protect natural spaces so that common and at-risk species alike have habitat in which to thrive.

Find out more about common species like the snowy owl here.

Snowy owl is one of 25 species or landscape options that can be symbolically adopted through NCC’s Gifts of Canadian Nature gift-giving program, that contributes to critical conservation work across the country.

Your gift will help care for habitat that snowy owl and other species rely on for their survival.