The American badger is a heavy-bodied, short-legged and short-tailed member of the weasel family. Its muscular neck and thick, loose fur protect it when an animal predator strikes. These defense mechanisms give it time to turn on the predator and bite or claw it.

When a badger is attacked, it also uses vocalizations. It hisses, growls, squeals and snarls. It also releases an unpleasant musk that may drive a predator away. 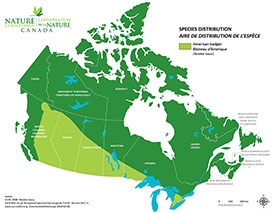 This species usually has lots of different dens and burrows. It uses them for sleeping, hunting, storing food and giving birth. A badger may change dens every day, except when it has young. Badger dens have one entrance with a pile of dirt next to it. When the animal is threatened, it will often back into a burrow and bare its teeth and claws. It may then plug up the burrow's entrance.

Two subspecies, those in British Columbia (jeffersonii) and Ontario (jacksoni), are now listed as endangered largely due to human impacts on their habitat such as habitat fragmentation, a clearing of native vegetation which may result in a reduction in prey and control of badgers as nuisance animals. Many are also killed on the road.

The jeffersonii subspecies makes its home in the dry interior of southern British Columbia in places like the Upper Columbia River Valley. In this part of the world, scientists estimate that, as of the year 2000, fewer than 200 badgers remained.

In the summer of 2004, the Nature Conservancy of Canada (NCC) advanced BC grassland conservation in the Upper Columbia River Valley with the protection of the 1,250-hectare (3,100-acre) Kootenay River Ranch. Although it has been used for cattle grazing and hay production, the grassland has not been broken up by roads and the property does not have any buildings on it. It stretches parallel and unbroken along seven kilometres of the Kootenay River on the east side of the property and exceeds 1.25 kilometres at its widest point.

The Kootenay River Ranch has been an important study area for wildlife biologists Trevor Kinley and Nancy Newhouse, whose research has confirmed the presence of endangered jeffersonii badger on the property, along with invaluable feeding and nesting areas for migratory and resident waterfowl.

With the protection of additional habitat in the dry grassland interior of British Columbia, NCC hopes to contribute to the survival of this mammal.

American badger is one of 25 species or landscape options that can be symbolically adopted through NCC’s Gifts of Canadian Nature gift-giving program, that contributes to critical conservation work across the country.

Your gift will help care for habitat that American badger and other endangered species rely on for their survival.