With its prominent tusks and whiskers, the walrus is one of Canada’s most easily recognizable Arctic species. Globally there are two recognized sub-species of walrus: the Atlantic and Pacific. Only the Atlantic walrus occurs in Canada.

The well-known tusks of the walrus are actually elongated canine teeth, present in both males and females. Tusks can grow up to one metre long and weigh up to 5.4 kilograms. Tusks are slightly longer and thicker among males, which are used for dominance displays and fighting.

Walruses are also well-known for their "vibrissae": a broad mat of stiff bristles surrounding the tusks that tends to give the walrus a whiskered appearance. These hypersensitive whiskers allow the walrus to detect its food, which is often buried deep in mud.

Walruses are very bulky. Adult male walruses can weigh more than 1,100 kilograms and be 3.1 metres in length, while females grow to 800 kilograms and 2.8 metres long. Their skin is very wrinkled and thick, with the blubber layer under the skin reaching up to 15 centimetres. 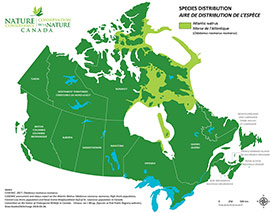 Walruses are discontinuously distributed throughout arctic waters of the northern hemisphere.

In Canada, the Atlantic walrus inhabits coastal areas in the northeastern Canadian Arctic. Walruses once occurred in the Atlantic provinces of Canada, but this population was hunted to extirpation by the late 18th century.

In Canada, the Atlantic walrus has been designated as special concern, and is listed as vulnerable on the IUCN Red List. Threats to walruses include over-hunting and climate change. Climate change can reduce the duration and thickness of the pack ice that walruses depend on for mating and reproduction.

On June 8, 2016, Shell Canada contributed more than 8,625 square kilometres of offshore rights in the waters of Baffin Bay, near Lancaster Sound, to the Nature of Conservancy of Canada (NCC). NCC helped to accelerate a marine conservation initiative of global significance by subsequently releasing the permits to the Government of Canada, to further Canada’s commitment in protecting National Marine Conservation Areas.

The protection of Lancaster Sound contributes to the securement of habitat for species such as walruses, polar bears, seals, narwhals, beluga and bowhead whales.