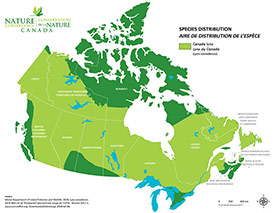 The Canada lynx can be found in intact forests of Canada and the U.S. (Alaska). Its distribution stretches south of the Canadian border through the Rocky Mountains, and also in states surrounding the Great Lakes and northern New England.

These seldom seen creatures are smaller than cougars and slightly larger than bobcats.

Canada lynx have long tufts of fur on their ears, and longer back legs than the bobcat. Their large paws are covered in thick, coarse hair. Their toes spread out and function much like snowshoes.

These large paws allow the species to live in a more northerly habitat than the bobcat. This allows Canada lynx to hunt in deep snow, which reduces competition for food. Since the Canada lynx cannot run fast, it must stalk and ambush from a close distance.

What is their conservation status?

Populations are lowest in its U.S. distribution and in the Atlantic provinces of Nova Scotia and New Brunswick where the Canadian lynx is listed as critically imperiled (S1) based on NatureServe’s provincial designation. Their status throughout the rest of Canada is listed as secure (S5) or apparently secure (S4) (NatureServe Online Species Database 2015). For more information on the conservation status of Canada Lynx in your area or U.S., visit the NatureServe Explorer website.

One of the ways the Nature Conservancy of Canada (NCC) is addressing the habitat needs for lynx is through the completion of a Natural Area Conservation Plan (NACP) for the Restigouche watershed in northern New Brunswick and Quebec. NACPs are designed to highlight critical ecosystems and species of a particular area and outline actions that are needed to protect the plants and animals that live there.

The Restigouche watershed is a natural corridor that lies in the middle of the Appalachian Mountain Range in northern New Brunswick, next to Quebec and separated by the Restigouche River. This area sprawls over more than 6,000 square kilometres. It is a critical corridor for species such as Canada lynx.

Conservation in the Restigouche Corridor Natural Area will help NCC protect the critical corridors for wide-ranging mammals such as Canada lynx.

Canada lynx is one of 25 species or landscape options that can be symbolically adopted through NCC’s Gifts of Canadian Nature gift-giving program, which contributes to critical conservation work across the country.

Your gift will help care for habitat that Canada lynx and other endangered species rely on for their survival.

You will receive a tax receipt for your donation, and you will help protect our country’s natural areas and the species they sustain — for today, for tomorrow and for generations to come.