The grizzly bear, one of the strongest and most impressive mammals in North America, is a symbol of Canadian wilderness. The grizzly is able to run at speeds of 45 kilometres/hour and can weigh 100-400 kilograms (220-880 pounds). 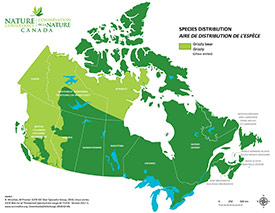 More than half of Canada's 26,000 grizzlies live in British Columbia, with the rest found in Alberta and the three territories. Grizzly bears occur from sea level to high-elevation alpine environments. Their habitat is diverse, ranging from temperate coastal rain forests to alpine tundra, boreal forest to dry grasslands and Arctic tundra.

What do grizzlies eat?

As an omnivore, this bear's diet consists of many different kinds of food, including plants and animals. Their adaptations allow them to dig, root, graze and hunt for their food. On the Pacific coast bears gather along riverbanks to feed on spawning salmon.

What is the species' conservation status?

Despite being one of the strongest mammals in Canada, the grizzly is still at risk from habitat loss and degradation. As development moves deeper into wilderness areas, the large tracts of habitat that grizzly bears need to survive are broken up. As a species that is highly sensitive to human disturbance (ie: mortality risk in areas of human activity and where roads create access) it is important to conserve these spaces for bears to roam freely. Globally, grizzlies only live in 50 per cent of their original range. In 2002, the Committee on the Status of Endangered Wildlife in Canada assessed the Northwestern population as a species of special concern.

NCC is also working to protect and maintain important corridors that allow safe passage for bears and other wide-ranging animals between habitats. The Frog Bear Conservation Corridor in the Creston Valley helps connect the isolated South Selkirk grizzly bear population with other bear populations to the east and south. Similarly, the Luxor Linkage Conservation Area, in the Columbia Valley helps provide safe passage for grizzly bears moving across the valley between the Purcell and Rocky mountains. Supporting grizzly bear research in BC

In the West Chilcotin, NCC supported research that collected hair samples in the Tatlayoko Valley and along the upper Chilko River between 2006 and 2008. These data allowed scientists to more accurately estimate populations in the area and will help direct resource and conservation decisions in the future. During this study, 21 different grizzly bears (11 males and 10 females) were detected on NCC property. That’s 39 per cent of the bears captured in Tatlayoko Valley that were found on NCC property at least once during the study!

In the Kootenays, NCC supported research on connectivity and linkage habitat mapping. GPS data from collared grizzly bears and habitat models were used to identify and predict grizzly bear linkage habitat in valley bottoms. These mapped corridors now inform much of the work NCC and our partners do because connecting small populations to larger ones will be vital for the survival of grizzly bears in the future.

Grizzly bears are also known to reside on these NCC properties

Darkwoods: the grizzly bears in British Columbia's Darkwoods are a genetically isolated and threatened population. They have been cut off from other populations due to human development. Elk Valley: An area within the Canadian Rocky Mountains rich with life and the bears favourite food, fish. Nearby residential and industrial development threaten the species in this mountain oasis.

Ellerslie Creek Conservation Area: Logging in and around Ellerslie Creek has destroyed many acres of natural habitat. However, NCC and its partners are striving to return this area back to a condition where the grizzly can roam freely.

Koeye Estuary: Identified as one of the most outstanding estuaries in British Columbia, Koeye features ideal habitat for grizzly bears.

Grizzly bear is one of 25 species or landscape options that can be symbolically adopted through NCC’s Gifts of Canadian Nature gift-giving program, that contributes to critical conservation work across the country.

Your gift will help care for habitat that grizzly bear and other species rely on for their survival.

You will receive a tax receipt for your donation, and you will help protect our country’s natural areas and the species they sustain—for today, tomorrow and for generations to come