The little brown bat is one of 18 bat species in Canada. It has shiny brown fur, measures only eight to 10 centimetres in length and weighs just five to 14 grams.

This species most closely resembles the northern long-eared bat. It can be distinguished by its shorter ears and the fleshy projection covering the ear’s entrance, which is shorter and rounded at the tip in the little brown bat. 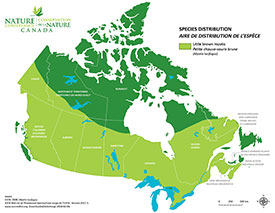 Of all bat species in Canada, the little brown bat has the largest distribution. It is found in every province and territory except Nunavut. This species is also found throughout most of the United States and the cooler mountainous regions of central Mexico.

Like most bat species, the little brown bat is nocturnal, typically roosting in trees, caves and buildings during the day. Throughout summer, it often raises offspring in tree cavities, attics, abandoned buildings and barns. When summer ends, colonies migrate up to 1,000 kilometres from their summer roosts to their winter ones, where they hibernate from October or November to March or April. Hibernation most frequently takes place in humid caves or abandoned mines with above-freezing temperatures.

While 50 per cent of the little brown bat’s global range is in Canada, this species is endangered in Canada. This is mainly due to white-nose syndrome, a fungus that thrives in cool, moist environments and infects the exposed skin of the muzzle and wings of hibernating bats. It causes bats to use more energy than they can afford during hibernation and to wake up more frequently than healthy bats, often leading to death.

Other threats to this species include habitat loss and degradation, pollution, climate change, pesticides and disturbance, or harm from wind turbines, for example. The pressure change produced by the rotating turbine blades can cause lethal barotrauma (injury from air pressure changes) to bats flying nearby. It is likely that barotrauma causes more bat deaths than direct strikes from turbines.

The little brown bat occurs in several natural areas where NCC properties are located. It can found in the Rocky Mountain Trench, South Selkirks and the Frog Bear Conservation Corridor in BC; Cooking Lake Moraine in Alberta; Happy Valley Forest, Frontenac Arch, Minesing Wetlands and Southern Norfolk Sand Plains in Ontario; the West Boreal Transition, East Parklands and Milk River Basin in Saskatchewan; and the Green Mountains in Quebec. By protecting these areas, NCC is helping to create viable habitat where bats can hibernate, forage and raise their young.

In Saskatchewan, NCC plans to install bat boxes and to hire a contractor to do acoustic surveys on several properties in summer 2018 to determine which bat species are present. Also this summer, NCC plans to capture bats, affix radio transmitters and track them to determine habitat use.

In BC, NCC has conducted bat detection surveys, been participating in NA Bat (a North American grid-based survey), put up several types of bat boxes in the Frog Bear Conservation Corridor and is working with researchers at the Wildlife Conservation Society to determine how to prioritize securement and how to properly steward the property for threats to bats, such as the emergence of white-nose syndrome.

In 2019, NCC plans to locate populations and hibernacula (winter hibernation sites) of the little brown bat on NCC properties in Quebec’s Green Mountains.