Known to many as the ”unicorn of the sea,” narwhals are a medium-sized whale that lacks a fin on its back.

In most males, the right tooth remains in the skull, while the left tooth grows as a spiral tusk that can be up to three metres long. This is the most recognizable feature of the male narwhal.

Growing anywhere between five to five and a half metres in length and weighing up to 1,900 kilograms, narwhals are closely related to the beluga whale in size and appearance. Both species make up the only two living members of the Monodontidae family. Whales in this family lack a dorsal (top) fin, which may be an adaptation for swimming under sea ice and to reduce heat loss.

A narwhal becomes lighter with age. Newborn narwhals are greyish or bluish grey, and turn to a uniform black or bluish black. Adults are whitish on the belly and mottled grey on their back. Very old animals, especially males, can be almost completely white. Narwhals use echolocation to help them navigate. They are also very vocal, and new research indicates they may even recognize each other by their individual voices. 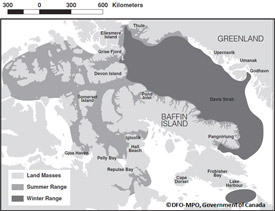 Narwhals primarily inhabit the Arctic Ocean in northeastern Canada, northern Greenland, Svalbard and northern Russia into the East Siberian Sea. They are more common in the eastern part of their global range. In Canada their range extends throughout the waters of the eastern Arctic from Ellesmere island south to northwest Hudson Bay.

Narwhals are listed as species of special concern in Canada. Narwhal populations may be limited or threatened by hunting, environmental contaminants, climate change and industrial activities.

Narwhals have been traditionally harvested for over a thousand years by Inuit people in northern Canada and Greenland for food and their tusk. To this day, the Inuit are the only group of people allowed to hunt narwhals.

Between 45,000 and 50,000 narwhals from the Baffin Bay population may summer in Canadian waters. Further information on populations is needed.

On June 8, 2016, Shell Canada contributed more than 860,000 hectares (8,625 square kilometres) of offshore rights in the waters of Baffin Bay, near Lancaster Sound to the Nature of Conservancy of Canada (NCC). NCC helped to accelerate a marine conservation initiative of global significance by subsequently releasing the rights to the Government of Canada, to further Canada’s commitment to protecting oceans and coasts. Lancaster Sound is home to species such as polar bears, seals, narwhals, beluga and bowhead whales.

In August 2017, NCC and Shell Canada (Shell) celebrated the news of an agreement on a final boundary for the Tallurutiup Imanga/Lancaster Sound National Marine Conservation Area. When completed, it will be the largest marine conservation area in Canada. The joint announcement by the Qikiqtani Inuit Association and the Governments of Canada and Nunavut was the result of many years of hard work by all involved.

Narwhal is one of 25 species or landscape options that can be symbolically adopted through NCC’s Gifts of Canadian Nature gift-giving program, that contributes to critical conservation work across the country.

Your gift will help care for habitat that narwhal and other species rely on for their survival.