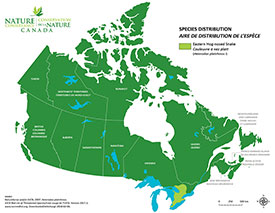 This snake prefers sandy soils and rocky areas with scattered trees. In Ontario, its range extends from the northern coast of Lake Erie to eastern Georgian Bay and the southern boundary of the Canadian Shield.

In late October, the eastern hog-nosed snake begins hibernation by settling alone in logs or digging deep burrows in sandy soils below the frost line. It re-emerges in early April, when it begins spring mating.

The eastern hog-nosed snake may look threatening, but it's actually quite harmless. It uses a number of defense mechanisms to protect itself from predators as well as humans. If threatened, the snake will flatten and spread its head, puffing up its body to resemble a cobra (even hissing and making mock strikes).

It's no surprise that when faced with this behaviour, people often mistake the eastern hog-nosed snake as venomous. However, its lack of venom, in addition to the location of its teeth at the back of its mouth, renders this snake virtually harmless to humans and would-be predators.

If its aggressive behaviour fails to ward off a potential threat, the snake will play dead, writhing about and finally rolling over on its back with its tongue out.

Eastern hog-nosed snake populations in southern Ontario are being threatened by the loss of sandy woodlands and oak savannahs where they typically live.

The Nature Conservancy of Canada (NCC) is working to conserve important habitat for eastern hog-nosed snakes, from the oak savannah and woodlands of the Port Franks Forested Dunes, Norfolk Forests and Rice Lake Plains, to the acidic rock barrens along Eastern Georgian Bay.

By protecting valuable habitat, educating the public and working with the Species at Risk Recovery Team, NCC will raise the eastern hog-nosed snake's profile and help protect this threatened species.