The green sea turtle is not always green.

Green sea turtles’ carapaces (shells) can be olive, brown, grey or black, and are sometimes mottled. Typically measuring less than one metre in length, in rare cases they can reach up to one and a half metres. The broad, flat carapace has slight serrations along the back edge.

The paddle-shaped forelimbs have a single claw that is longer and more curved in males than in females. Males also have a prehensile tail with a flattened claw at the end. 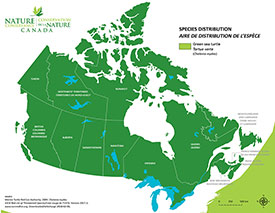 Although green sea turtles have only been seen in Canada off the west coast of Vancouver Island, worldwide they are found in both the Atlantic and Pacific oceans.

Green sea turtles migrate across 2,000 kilometres of open ocean, but often feed in shallow water three to five metres deep and can be seen resting on reefs and rocky areas.

Threatened (according to the International Union for Conservation of Nature).