They're the armoured tanks of the natural world. With their mighty jaws and muscular build, snapping turtles are Canada’s largest freshwater turtles.

Snapping turtles weigh up to 16 kilograms and usually grows to 35 centimetres in shell length (but occasionally up to 50 centimetres long). This robust species has a ridged, thick upper shell (carapace), which is tan, olive or black, and a long, studded tail. Its bottom shell (plastron) is small compared to that of other turtle species, leaving the snapping turtle's limbs and neck exposed. The snapping turtle is unable to fully retract into its shell when threatened, which is why it snaps its jaws as a defense against predators. 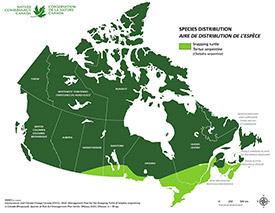 In Canada, this species is widespread — from southeastern Saskatchewan to Nova Scotia. Snapping turtles are still fairly common in eastern Canada, but less so in Saskatchewan and Manitoba.

This aquatic species can be found in freshwater habitats with slow-moving water and a soft mud or sand bottom.

Snapping turtles are a species of special concern. They are also Specially Protected Reptiles under the Ontario Fish and Wildlife Conservation Act.

Although snapping turtles have few natural predators due to their size, their numbers have declined because of the loss of their wetland habitat. They are particularly vulnerable to road mortality, because females often have to cross roads to find suitable nesting sites. Their reputation as aggressive, voracious predators has unfortunately also made them targets for persecution by people. Snapping turtles do not attack swimmers, and are only aggressive when provoked. They play an important role in the ecosystem as scavengers and help keep our waters clean.

Snapping turtles can live over 70 years, and only reach sexual maturity at 15 to 20 years of age. As a result, any loss of mature individuals can impact the population. Roadside nests are at risk of being destroyed by traffic, and eggs and hatchlings are also vulnerable to being eaten by other animals.

The Nature Conservancy of Canada (NCC), with support from our partners, launched the Carapace Project during the summer of 2017. The project invites members of the public to report turtle sightings throughout Quebec. The data collected helps identify sites in need of conservation action and helps define hot spots for road mortality.

To date, 856 turtle sightings have been reported on the website (carapace.ca), of which half were snapping turtles. NCC conserves freshwater habitats that support species like the snapping turtle.

Across Canada, NCC has conserved properties where snapping turtles occur, including in the Outaouais region, the Grand Marais de Bristol, Clarendon and Sheenboro natural areas in Quebec, the Interlake Natural Area in Manitoba and the Silver River property in Nova Scotia. In Ontario, NCC has restored wetland habitat on Pelee Island and in the Southern Norfolk Sand Plain. Snapping turtles were spotted using these new habitat areas almost immediately!