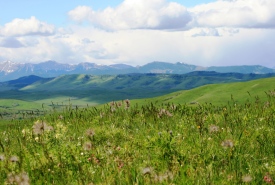 A place worth protecting

The spectacular landscape of the Rocky Mountains is world-famous for good reason. Not only are the Rockies an awe-inspiring geological marvel, they also support some of the most diverse ecology on the planet.

From alpine peaks down to the foothills that roll away into populated valleys, the Rockies support a wealth of plant, animal and human communities. This abundant natural heritage is of vital importance to all who live and play in the area, and is equally beloved by Albertans and British Columbians.

By working together we will be able to ensure the Canadian Rocky Mountains are protected as a thriving, diverse and iconic national — and natural — treasure.

The Nature Conservancy of Canada (NCC) has a long history in the Canadian Rockies where we have conserved over 280,000 hectares (700,000 acres). From the East Slopes in Alberta to the South Selkirks in BC, we work towards creative conservation solutions that ensure Canadians can continue to enjoy the incredible richness of this area for now and forever.

Watch the video below and learn more about our work in the Rocky Mountains. NCC has completed more than 250 conservation projects in Alberta, including more than 40,000 hectares (100,000 acres) along the eastern slopes of the Canadian Rockies in an area known as the Rocky Mountain Front Conservation Region.

The Rocky Mountain Front contains large remnant tracts of foothills parkland grasslands, montane forest and important watershed and riverside areas. This area is under direct threat from most human activities.

The eastern slopes of the Rocky Mountains serve as a key area for maintaining wide-ranging carnivore populations and providing essential habitat for many species. NCC has helped to conserve almost 400,000 hectares (1 million acres) in British Columbia, much of this in our Canadian Rockies Program Area in BC's Kootenay Region.

NCC’s conservation work aims to protect wildlife corridors and to enhance existing networks of protected areas throughout the Canadian Rockies program area. This is a space in which conservation can, and should, think big.

Help us to conserve this incredible landscape

NCC has recently launched the Canadian Rockies Fund which allows donors to direct their support to our conservation efforts in both Alberta and British Columbia.

Your gift will be directed towards conserving new properties in the Canadian Rockies and helping with the ongoing stewardship of properties once conserved.

Alberta and British Columbia standing together for conservation

On July 28, 2016, this interprovincial conservation inititiave offically launched at an event at SRL-K2 Ranch in Invermere, BC. Hosts Bob and Barb Shaunessy generously opened their doors to allow guests an opportunity to spend the day enjoying nature in the heart of the rockies.