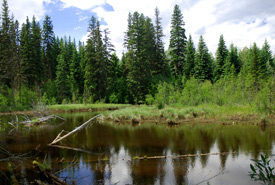 Lush greenery paints the banks of Swift Creek, rustling alongside the rippling waters that carry sockeye and Chinook salmon toward the Fraser River. Once home to an adventurous homesteading family of six, this idyllic setting is now conserved in their name as the Anne Hicks Conservation Area.

Just west of the BC-Alberta border and Jasper National Park, near the small town of Valemount, the Anne Hicks Conservation Area encompasses a 12-hectare (29-acre) area of mature Douglas-fir forest as well as established stands of spruce and black cottonwood. Native grasses and forbs create a rich understory in this vibrant riverside ecosystem, which provides habitat for small mammals and migratory as well as resident birds.

The Anne Hicks Conservation Area marks the first of the Nature Conservancy of Canada’s (NCC’s) projects in the Valemount area. 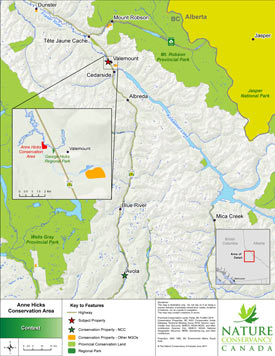 Located within the McLellan River watershed, the primary ecological feature of the Anne Hicks Conservation Area is its proximity to Swift Creek and the forests that support it. The forests that line the creek are essential to its health; shade from the trees helps to regulate water temperatures for fish. The tree roots provide stability to the riverbanks, as well as micro-habitats for spawning fish.

Recent development proposals near Valemount highlighted the need for conservation action in this area. The threat of development and deforestation would put at risk the vitality of Swift Creek and the healthy populations of sockeye and Chinook salmon, as well as the nationally endangered bull trout that swim in its waters.

Anne Hicks (nee Adolphe) was born in Beausejour, Manitoba, in 1917. She met George Hicks through the advertisements in the Star Weekly newspaper in Winnipeg and corresponded with him for two years before embarking west to the property near Valemount, BC. There, Anne and George became homesteaders and raised their four children — two girls, two boys — in a log cabin of their own making.

“I think there were like 10 people here when they arrived,” says Roger Hicks, one of Anne and George’s four children. “It was all brand new here back then — no roads, no railroads.”

The remote wilderness of the area didn’t dissuade the couple from starting a life; far from it. Explaining George’s decision to move from Ontario to the wild expanse of east-central BC, Roger says: “He fell in love with the mountains, and he stayed.”

That love for and dedication to making a life in nature was passed along to the children as they learned to fish, mountain-climb and work in the garden to grow food that would last through the winter. “We were the original hillbillies,” Roger laughs. “We didn’t have shoes in the summertime.”

Anne Hicks lived on the property until 1972. From there, the land was passed on to the children, until one son (also named George) approached the Nature Conservancy of Canada to conserve the land for future generations by bequeathing it to the organization.

“We always thought about it,” Roger says. “It was always what my brother George wanted to do. His only child died and he wanted to make sure the land got left to conservation. Mother too was like that.”

“My mother would be honoured to have a conservation area named after her. She might not believe it. She worked so hard up here, you know,” Roger continues. “For all those years. My father had a park up here named after him so we thought it would be good to name something after my mother, who worked as hard, or harder.”

The conservation of the Anne Hicks Conservation Area was made possible by a generous donation from the Hicks family, who left the property to NCC through the will of George Russell Hicks. Learn more about what you can do to leave a natural legacy.

Funding support for the long-term stewardship of the new conservation area has been provided by the Fish & Wildlife Compensation Program (FWCP). The FWCP is a partnership between BC Hydro, the Province of BC, Fisheries and Oceans Canada, First Nations and public stakeholders to conserve and enhance fish and wildlife impacted by BC Hydro dams.