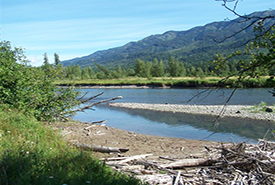 Located along the Elk River near Fernie, BC, the Morrissey Meadows Conservation Area is nestled within a network of wetlands, streamside and woodland habitats. The variety of landscapes and diversity of aquatic and terrestrial wildlife here make this area a valuable addition to the conservation landscape in the Elk Valley. This connectivity is key to the project’s value. Situated within an identified regional wildlife corridor and straddling Highway 3, Morrissey Meadows Conservation Area enhances habitat security for wide-ranging mammals through the Elk Valley.

The wetlands on Morrissey Meadows also support many important species. This habitat will be enhanced through restoration activities, such as planting native shrubs and trees to reduce erosion and improve bank stability.

It is widely agreed among conservation biologists that the safe movement of large mammals between populations is essential to their long-term viability in the Elk Flathead Natural Area. By closing a gap between provincial land and the Elk Valley Heritage Conservation Area, the acquisition of Morrissey Meadows Conservation Area by NCC enhances this network of protected lands in a key wildlife corridor.

The wetlands here include a meandering braided section of the Elk River, which provides vital spawning and rearing habitat for westslope cutthroat trout and bull trout, both provincial species at risk. Side channels offer critical places of refuge during periods of high river velocity or heavy sediment flows. The property now known as Morrissey Meadows Conservation Area was once the homestead of the Fitzen family. The farm was previously uninhabited until Mike Fitzen purchased the land in the early 1900's. Mike and his wife, Mary, had three children, Kay, Ludy and Charlie. Of the three children, Charlie was the only one to be born in Canada. As a young boy, Charlie grew up building a life respecting and depending on the bounties of nature. All of the buildings on the farm were built from Timber that Ludy hand-hewed with an axe from the many surrounding trees. Now, these buildings still remain on the farm after withstanding three ravaging floods. For the family's first three years on the property, the Fitzen's lived in what would later become the chicken coop. To this day '1926' is painted on its side to commemorate the year it was built.

After Mike Fitzen's passing in 1963, the next generation of Fitzen's took over. Charlie and his wife, Ruth, lead years of homesteading marked with extensive gardens and abundant apple trees, but it was living shoulder to shoulder with wildlife that made for the most remarkable memories. Charlie and Ruth’s granddaughter, Deb de Hoog, is now the keeper of those memories, whether it was listening to the wolves and coyotes at night or finding the remains of a jar of fat that a bear had helped itself to from the porch fridge.

“It was real authentic living. We would wake up in the morning and catch fish in the river,” Deb recalls from the summers she spent with her grandfather on the land. “We ate so much fish for breakfast.” Over the years, the Fitzen’s land became a place where folks from the surrounding towns would gather to play music, share food and build community. Other farmers would come for coffee in the morning and sit and talk all day.  “There’s so much history there,” Deb remembers.

“Grandpa would have been really happy to know that the land went to conservation. He was always outside,” says Deb. “He didn't even put in indoor plumbing until his son, Jimmy, returned to live on the farm after a stint in the town of Fernie."

Charlie was said to know Fernie better than anyone, often bragging that he had climbed every one of the mountain ranges around the area and even had his name in a bottle at one of the peaks. On behalf of her family, Deb is delighted to see Morrissey Meadows maintained as a conservation area through NCC, so that the natural wonders of their family history may live well into the future.

The conservation of Morrissey Meadows was made possible with the generous funding support of: