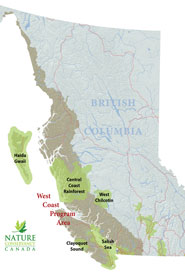 British Columbia's west coast is one the most biologically productive areas on Earth, with more than 27,000 kilometres of coastline. The abundant marine life, lush forests, dramatic mountains and mild climate draw people here, yet this popularity has also made the south coast the most heavily impacted region in the province. Wetlands and coastal Douglas-fir forests have become endangered, while the shoreline has been altered through industry, residential developments and recreation.

Elsewhere, coastal BC is increasingly threatened by high-risk resource development on land and in the ocean. Despite the pressures, the west coast continues to sustain a high diversity of species. The natural systems that clean our air and water and support our human communities also thrive. We must work together to protect the nature and beauty of BC's west coast.

The Nature Conservancy of Canada focuses its work in priority conservation areas that have been identified through our science-based planning initiatives. Find out about our priority areas on the west coast: The Nature Conservancy of Canada is dedicated to engaging with the indigenous communities in whose traditional territories we work. From the Council of the Haida Nation on Haida Gwaii, to the Heiltsuk First Nation and the Wuikinuxv First Nation in the Central Coast, to many Coast Salish nations in the Salish Sea, we learn from and collaborate with these communities and leaders to reach the common goal of protecting the land.

Our success isn't just for the birds! We welcome visitors to some of our favourite conservation areas:

Looking for more options? Check out the complete list of Nature Conservancy of Canada conservation areas that you can visit in BC.