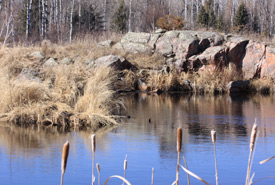 The Whitemouth River Watershed (WRW) represents a hot spot for species diversity in Manitoba. This landscape is the meeting place of the boreal coniferous forest, the eastern Superior mixed forest and vast peatland complexes. Peatlands store more carbon per unit area than any other terrestrial ecosystem on Earth and, along with other wetland types, extends across almost half of the WRW. Carbon accumulation occurs in organic matter that has built up as peat over thousands of years.

The Whitemouth and Birch rivers wind their way, generally north, through the natural area towards their confluence with the Winnipeg River. Large peatland expanses dominate the southern portion of the watershed and seepage slopes along the Whitemouth River "valley" in the northern portion. Bands of rich riparian gallery forest occur immediately adjacent to the Whitemouth, Birch and Boggy rivers and Whitemouth Lake. Mixed deciduous and upland coniferous forest occurs on better-drained soils. The largely flat landscape typical of land formed under the influence of glacial Lake Agassiz is punctuated by bedrock outcrops of the Canadian Shield in the northeastern part of the Natural Area and by a series of sandy and gravelly morainal and beach deposits along the western side.

Gray wolf and the globally uncommon mottled duskywing still roam the natural area’s large blocks of relatively intact forest. The rivers of the WRW are characterized by a fauna that is unique among Canadian rivers and support one of Canada’s only populations of the threatened carmine shiner. Hardwood-dominated eastern deciduous floodplain forests extend over a small portion of the landscape but support a unique species assemblage, including several provincially rare species more typical of eastern North America (e.g., Bloodroot and Dutchman’s Breeches).

For more information about the WRW and the conservation work NCC is undertaking in the region, see NCC’s Whitemouth River Watershed Natural Area Conservation Plan Summary.