A day in the field, courtesy of Parkbus If you live in downtown Toronto, you, like 28 per cent of your neighbours, may not own a car. They are expensive, a bother to park and, unless you drive a hybrid or electric, not particularly great for the planet. This, added to the growing traffic chaos of the sprawling Greater Toronto Area, makes cars an impractical method of transportation for city dwellers.

So how do you get out of the city?

Unless you rent a car, which can be expensive, many Torontonians are missing out on exploring the beautiful natural spaces that this province has to offer.

This past spring, as part of a pilot program, Parkbus and the Nature Conservancy of Canada (NCC) collaborated on our Conservation Volunteers program. The program invites people to spend a day in nature, helping NCC with important stewardship activities, such as invasive species removal, building trails, counting species or planting trees, just to name a few. Typically, to attend these events you need a car or to join a carpool. By partnering with Parkbus, NCC was able to bring people from Toronto out to the Hazel Bird Nature Reserve to help with some spring planting.

Part of the ActiveDays program, this was the first ever, hands-on stewardship event Parkbus has hosted to date.

Thirty-three eager and enthusiastic volunteers from Toronto helped NCC plant prairie grasses and wildflowers to assist with restoration efforts on the property. With trowels in hand and the sun shining brightly, in just 90 minutes, volunteers and staff planted 300 wildflowers and 1,440 grass plugs. In the afternoon, the Parkbus crew was treated to a property tour. For many of the volunteers, this was the first time they had been to an NCC property or had even heard of the national land conservation organization. 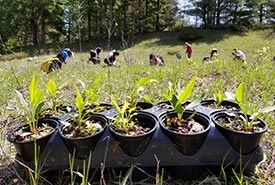 “This was a wonderful opportunity to educate some of Ontario’s urban population on the tall grass prairie ecosystem and promote the work we do,” says Val.

The Hazel Bird Nature Reserve is part of the Rice Lake Plains tall grass prairie. The tall grass prairie once covered a significant part of southern Ontario’s landscape, but now less than three per cent of the province’s grassland habitat remains.

Once dominated by massive black and white oaks and grasses like big bluestem, Indian grass and switchgrass that grew more than two metres high, today, the Rice Lake Plains are badly fragmented and overgrown with non-native species. A refuge for species at risk, including many grassland birds and eastern hog-nosed snake, the Rice Lake Plains remain a priority for conservation.

NCC has been working for more than 17 years to restore this important ecosystem through invasive species removal, prescribed burns, thinning and planting of native species. The work that the Parkbus volunteers accomplished is a big part of that restoration effort.

“The work our volunteers do contributes directly to our success in managing and restoring one of Canada’s most endangered ecosystems,” says Val. “Without their dedication and enthusiasm, our work would not be possible.”

Thanks to a three-year, $663,200 Grow Grant from the Ontario Trillium Foundation made in late 2017, NCC has been able to do even more to restore and conserve habitat on the Rice Lake Plains. To date, NCC and our partners, through the Rice Lake Plains Partnership, which includes Alderville First Nation, have conserved more than 1,076 hectares (2,660 acres) of priority conservation lands. The Hazel Bird Nature Reserve, and other Rice Lake Plains properties, have been generously supported by funding from the Government of Canada, through the Natural Areas Conservation Program, and other donors.

To learn more about the Hazel Bird Nature Reserve or to find out how you can visit, check out NCC's Nature Destinations.