On a hot summer’s day, Jill Crosthwaite, conservation biologist with the Nature Conservancy of Canada (NCC), brushes the dirt off of her hands and looks up. A slight movement among the native wildflowers from which she is collecting seeds catches her attention. She is as still and quiet as possible to catch a glimpse of whatever critter is making its home among the coneflowers. She hopes that it might be the elusive, at-risk gray fox looking for breakfast, or maybe an eastern foxsnake, moving into the open to sun itself.

Suddenly a twitching nose and a pair of fuzzy ears bound into view. It is only a rabbit, but it still makes Jill smile. It is a positive sign to see wildlife using this meadow as their habitat. It means that NCC’s restoration efforts on Pelee Island are working.

More than eight years ago, NCC began to transform former agricultural fields into meadows and wetlands. Each year NCC staff look for low, wet areas that could become future wetlands. Then, using contractors with excavators and bulldozers, these areas are dug deeper and wider, so that they will become ponds once the spring thaw and rain come. Volunteers and staff then collect seeds from native plants already growing on the island and plant them in the meadows and newly created wetlands, restoring the landscape to what it once was: a rich, fertile habitat for many species. 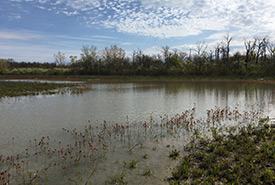 After wetland restoration, Pelee Island, ON (photo by NCC) 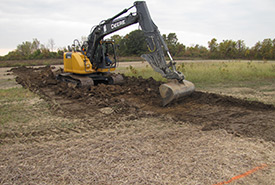 Before wetland restoration, Pelee Island, ON (photo by NCC)

Jill has already documented a variety of wildlife, including some species at risk, using the restored habitat, such as coyotes, palm warblers, monarchs, giant swallowtails and eastern gartersnakes.

“In one of the ponds we created, we found a snapping turtle and three painted turtles, which was pretty neat as well,” said Jill. “Build it and they will come.”

Recently, endangered small-mouthed salamanders were found on one of NCC’s restored wetlands. 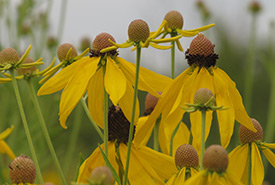 Beyond creating habitat for species at risk, the wetlands are also good for people. The restored ponds help with much-needed flood reduction, water filtration, erosion reduction and nutrient retention.

“Wetlands help to keep down pollution levels by filtering out nutrients like phosphorous and nitrogen, which are currently a big problem for Lake Erie because they cause toxic algal blooms. Wetlands also support many plants, which are important for insects, including pollinators that help produce our food,” said Jill. 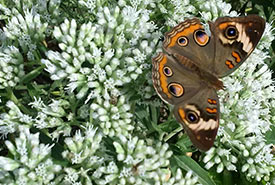 Pelee Island is the largest of the Canadian Western Lake Erie Islands, an archipelago of 22 islands spanning the border of Ohio and Ontario. The nine Canadian islands are among the most biologically diverse areas in Canada, and support a high density of rare species. The islands also form two globally significant Important Bird Areas.

NCC has protected over 390 hectares (1,000 acres) on Pelee Island, the most southerly inhabited part of Canada. 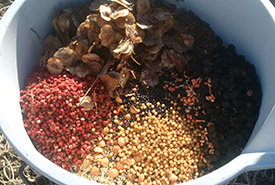 Seeds for planting, Pelee Island, ON (photo by NCC)

Many of NCC’s properties on the island are publically accessible. The Florian Diamante Nature Reserve supports a section of the Municipality of Pelee’s Ecotrail system and is a great way to experience the beauty and diversity of this area.

“We encourage people to get out there and take a look at the work we’ve done,” said Jill.