Searching for salamanders in Ontario’s everglades About an hour and a half north of Toronto lies a lush and beautiful oasis — the Minesing Wetlands. At more than 10,886 hectares (26,900 acres), Minesing Wetlands are one of the largest and least disturbed wetland complexes remaining in southern Ontario, where already more than 70 per cent of this important habitat has been lost.

A key stopover site for birds, and home to frogs, turtles and a host of insects — including the globally rare and nationally endangered Hine’s emerald dragonfly — this watery paradise that is Ontario’s own everglades may also host a few special amphibians: salamanders.

Salamanders and newts can live on land, in the water or a combination of the two. The Minesing Wetlands’ mix of forests, fens and swamps provides excellent habitat for these amphibious animals.

Each spring and summer, Nature Conservancy of Canada (NCC) staff monitor properties to see which salamanders are using the Minesing Wetlands for all or part of their life cycle.

In 2016, NCC staff found a mudpuppy salamander, but other sightings of this elusive species have been few and far between. The lack of population information is due, in part, to the sheer inaccessibility of the Minesing Wetlands during salamander breeding season in the spring, as the entire wetland floods and much of it is fully underwater.

One area that is studied is the Tom Wilcox Nature Reserve, a 172-hectare (425-acre) fen and swamp habitat, which is part of the Minesing Wetlands and an important stopover for waterfowl, and home to rare turtles, flowers and, hopefully, salamanders. 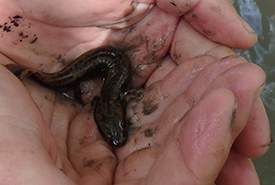 In 2016, Trisha Wilcox began to think about doing something to honour her late father, Tom Wilcox. Conservation seemed the most fitting, as her father was passionate about protecting biodiversity.

“He believed in preserving areas of natural beauty, of natural value. He believed that water was a human right. [My father] would go hiking and tromp all over the Welsh mountains with his sister. He was really into the outdoors and very concerned about preservation and conservation,” said Trisha.

Trisha wanted to protect a natural area that was close to her home in southern Ontario so that she could visit. She also wanted to focus on a place that provided habitat for salamanders, a species of great interest to her.

“When I was young, we camped all over Europe,” remembered Trisha. “We were in this campsite, at the bottom of a little hill, I can see it now. There was a whole big patch of bright yellow sunflowers. They were huge! The place was filled with fire salamanders...and that made such an impression on me that I’ve never forgotten them.”

The Minesing Wetlands seemed to be the perfect fit for Trisha, who chose NCC because of our scientific approach to conservation, long history and fiscal responsibility. Thanks to her support, NCC acquired the 172-hectare (425-acre) Tom Wilcox Nature Reserve, named in honour of her father.