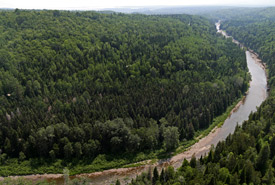 The Nature Conservancy of Canada (NCC) has conserved 315 hectares (778 acres) on the shores of the Malbaie River between the towns of Gaspé and Percé. Due to its close proximity to the Gulf of Saint Lawrence, this property boasts a rich biodiversity on its land and in its waters.

The riverfront conservation lands protect important habitat for Atlantic salmon — a species of special concern. The property is blanketed with stands of mixed forest in which many species of mammals and birds live. The Malbaie River and its nearshore ecosystems form an essential link for coastal habitats conserved around the tip of the Gaspé Peninsula. Increased land connectivity helps facilitate the movement of wide-ranging mammals such as black bear and moose.

The property contains habitats used by at-risk fish species, including Atlantic salmon, striped bass and American eel. Fourteen of the 22 Atlantic salmon pools established in the private segment of the Malbaie River and its tributaries are situated on the borders of the property.

A mix of balsam fir, white birch, yellow birch and red maple dominates much of the forested areas, while white spruce and northern white cedar can be found here at the northern limit of their range. Cedar groves more than 70 years old can be seen towering over the riverbanks. This property features forests of the Appalachian mixed forest type.

For more than 15 years, NCC has developed strategies to ensure long-term conservation in the Southern Gulf of Saint Lawrence. To date, NCC has protected nearly 500 hectares (1,235 acres) throughout this natural area. Conservation activities were carried out in open dialogue with local communities, so that residents and visitors can enjoy the publicly accessible sites.

This conservation project was made possible through the generous funding support of:

Read about our other TD Forests conservation projects.