Wetland and forest protected by NCC in Clarendon, Quebec (Photo by Mike Dembeck)

Protecting the wetlands and forests in the Bristol and Clarendon lowlands 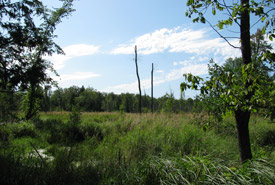 Wetland and forest protected by NCC in Bristol, Quebec (Photo by NCC)

Since 2004, the Nature Conservancy of Canada (NCC) has invested greatly in the conservation of two priority areas in the Ottawa Valley: those of Bristol and Clarendon.

These areas shelter vast wetlands, forests and shorelines that are in a remarkably natural state as well as feature the most beautiful alvars in Quebec. This ecoregion also boasts some of the province’s most biologically diverse habitat. It is frequented by waterfowl, 110 species of breeding birds, important populations of Blanding’s, musk and map turtles and numerous other species of fauna.

Thanks to the participation of its numerous partners, to date NCC has protected more than 5,680 acres (2,300 hectares) of highly valued natural areas in Bristol and Clarendon.

NCC wishes to emphasize the contributions of:

Warmest thanks go also to the Muirhead, Connelly and Lamarche families, who have supported NCC in our conservation mission.