MAPS (Monitoring Avian Productivity and Survivorship) is a continent-wide program that monitors bird demographics and contributes to bird conservation. This past summer (2019) was the second season for the Big Valley MAPS station. Over the six sessions, we captured 109 newly banded birds and 43 recaptured birds of 23 different species.

Overall, the number of birds captured this season was lower than last year and we’re not sure why (i.e. in 2018 we had 168 newly banded birds and 39 recaptures); however, two other MAPS stations in the province also experienced lower numbers this year as well, so whatever was going on it was not limited to our site.

Another interesting difference between this year and last year is that we caught different species in both years. Of course, many of the more common species are the same between years, but there are multiple species that were only caught in either one year or the other. For example, we captured six species in 2019 that we did not capture in 2018 (yellow-bellied sapsucker, Swainson’s thrush, pine siskin, song sparrow, black-and-white warbler, and hairy woodpecker). There were four species that we captured in 2018 that we did not capture in 2019 (veery, white-breasted nuthatch, Baltimore oriole and rose-breasted grosbeak).

One exciting highlight from this season is that we captured a bird that was already banded but that was not banded at Big Valley MAPS originally. What this means is that we captured someone else’s bird! This is a very exciting occurrence for bird banders. The bird in question was a male yellow-bellied sapsucker that was banded as a hatch year bird at the Craven MAPS station in 2018. The Craven MAPS station is approximately four kilometres up the valley from the Big Valley MAPS station. Also of note, this bird was part of a pair that had a nest near one of the nets and we ended up catching both the male and female multiple times in the first couple sessions. So, we know that our male sapsucker was born last spring/summer, went south for the winter and then came back to set up house approximately four kilometres away from where he hatched — pretty cool! Hopefully he comes back to Big Valley next year! 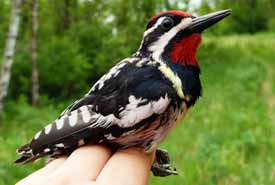 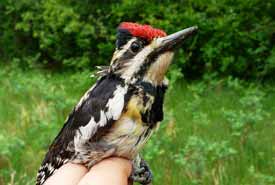 Another highlight from 2019 is that we captured two ruby-throated hummingbirds. Hummingbirds require special training and custom-made bands to band, and the bird banders at the Nature Conservancy of Canada's Saskatchewan Region do not have that training at present and are not able to band hummingbirds at the Big Valley MAPS station; however, we are still able to collect data on age, sex, and breeding condition on the birds prior to releasing them. There is nothing more magical than having a tiny hummingbird in the palm of your hand!

Overall, the 2019 MAPS season at Big Valley was a great success and we are looking forward to catching many more birds next year!