10 spectacular species to celebrate during the holiday season 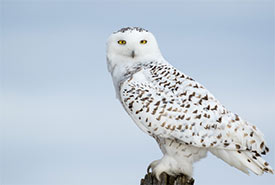 During the holiday season, we often show gratitude and express appreciation for our friends and loved ones. It can also a time to celebrate the resilience of Canadian species and to learn about the biodiversity that is all around us. Join us as we countdown 10 spectacular species that live right here in Canada.

A symbol of Canada’s north, the snowy owl blends perfectly into a snow-swept landscape with only their beaming yellow eyes to catch your attention. This regal owl spends their summers in the high arctic hunting lemmings and ptarmigans. Similar to many Canadians, snowy owls are “snowbirds.” To avoid the harsh Arctic winters, snowy owls migrate as far south as the Great Lakes to enjoy the warmer weather. During your holiday feasts, the snowy owl probably wouldn’t be a welcome guest for a lack of decent table manners. Snowy owls are known for eating their prey without chewing and in only a handful of gulps! 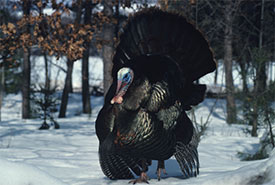 The voluptuous plumage and vibrant red and blue heads of wild turkeys often come to mind during the holidays. Here in Canada, the eastern wild turkey is native to southern Ontario and Quebec. As you head westward, you still may run into a wild turkey as the Merriam’s wild turkey was introduced in the 1950s and 60s throughout the prairies provinces and southern BC. The classic “gobble gobble” call is voiced by male turkeys to attract females for mating in Spring. Of course, it takes more than a nice gobbling voice to catch the eyes of female wild turkeys, called hens. Males will first puff up their feathers to appear much larger than they actually are. As a final dramatic display, they fan out their 18 tail feathers in hopes of winning a female over. 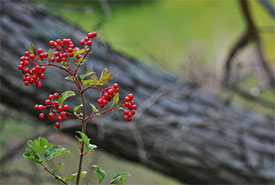 In every Canadian province, the highbush cranberry can be found growing in wet areas along shorelines and wetlands. The clusters of festive red berries produced by this bush are similar to the green bean casserole that Aunt Pam brings every year for holiday celebrations: unappetizing, but you’ll eat it if you have to. As winter progresses and food availability dwindles, these berries become an important food source. You’ll find cedar waxwings, robins and grosbeaks flitting from one highbush cranberry to another. This bush also supplies snacks for deer, moose and red squirrels during the winter months. 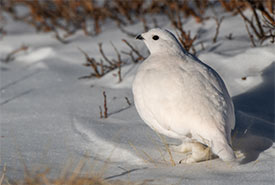 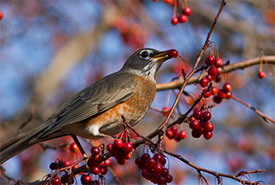 Following a recent snowfall, everything seems so still and quiet. Not long after the sun rises, a familiar sound might ring in your ears, “cheerily, cheer up, cheerily, cheery me.” The American robin is a familiar and comforting sight, waking up the neighbourhood with its happy song. While robins often can’t feast on worms in the winter, they rely on berries left over from the summertime. By growing native fruit-bearing shrubs and trees including the Canadian serviceberry, mountain ash and winterberry, you can help fill the bellies of local birds like the robin throughout the holiday season. 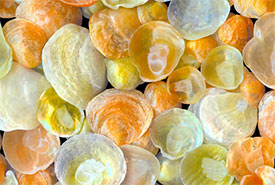 That isn’t a spelling error; we really did mean to say jingle shells, not jingle bells! Jingle shells are bivalve mollusks, similar to oysters and mussels. They get their name from the delightful sounds they make when strung together for jewelry and wind chimes. Before being hung on the back porch and jingling in the wind, this bivalve can be found in shallow waters off the east coast of Canada. They feed on plankton by sucking water in through their gills and filtering out this nutritious food. Jingle shells shimmer like fresh snow as the morning sun rises, giving rise to another fun name of theirs, “mermaid’s toenails.”

4. Trim up the evergreen tree 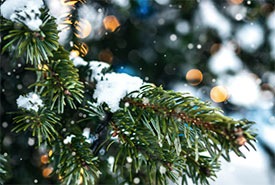 Isn’t it wonderful walking along streets with evergreen trees of all sizes lit up and softly glowing with lights of all colours? From spruce trees to pine trees to fir trees, the dark green needles of these conifers trees help bring colour to the landscape during the holidays. The vast majority of Canada is covered by the boreal forest, a forest dominated by conifers and designed to withstand long and harsh winters. Canada’s boreal forest helps purify the air and water, regulates the climate and provides habitat for countless species. If you celebrate the holidays with a Christmas tree, check your local wildlife center to see if they accept tree donations. The Calgary Wildlife Rehabilitation Society uses these trees to provide munchies for recovering porcupines in their care. 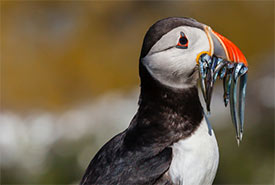 Atlantic puffins are pros at stuffing their beaks with as many little fish as possible, just like many of us gorge on potatoes, bread and pie during the holidays. With full bellies, it’s no wonder that Atlantic puffins are such poor fliers. Where these birds really shine is in their swimming capabilities. Puffins can hold their breath underwater for up to one minute and catch as many as 60 fish in one dive. With 95 per cent of North America’s puffin population breed along the Newfoundland and Labrador coastline, it makes sense why the Atlantic puffin is the official bird of this province. 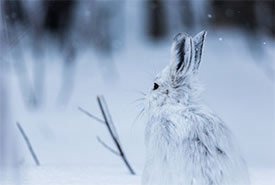 One of the first signs that winter is approaching is the moulting of snowshoe hares from brown to white. By the time the holidays roll around, they are fully camouflaged and only their tracks can be seen drawing patterns in the snow. Snowshoe hare populations are closely tied with lynx populations. Every 10 years, the hare population goes through a boom-and-bust cycle. As the hare population grows, there is more food availability for lynx and so their population grows as well. When the local environment can no longer support the high hare population, their numbers start to decline and with it, the lynx population declines. Some years, it might seem like your neighbourhood is undergoing a fuzzy takeover. Then other years, only if you’re lucky, you’ll see a snowshoe hare hidden amongst your twinkling backyard trees. 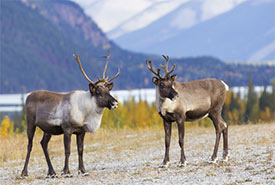 If you imagine silhouettes running across the dark skyline and the sounds of jingling bells and hooves on rooftops, nine names might come to mind, one of which being Rudolph. Reindeer aren’t just Santa’s helpers, they are wild animals that also go by the name caribou. Northern Europe and Asian populations are referred to as reindeer, meanwhile, North American populations are what we know as caribou. Even though our caribou can’t take flight around the world in one night, they undertake one of the world’s greatest land migrations. Barren-ground caribou travel roughly 1,200 kilometres every year as they migrate from northern birthing and grazing grounds to moderate southern climates for winter.