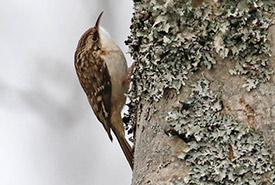 Some bird species migrate south for winter, and some are year-round residents in Canada. Others migrate to southern Canada from northern forests or the Arctic and hang around until spring. Birdwatching is one of the easiest ways to enjoy nature, sometimes with little effort, and it can be done indoors or out.

As a hobbyist birder, I love seeing what I read about online or in books transpire in the flesh. Sometimes, I observe a quirky behaviour that I haven’t yet heard about, and those become great stories to tell my kids.

Here are five species that are relatively easy to see (some even in cities) across Canada. How many will you be able to spot this winter?

See you on the way up: brown creepers

Brown creepers are small songbirds with a downward-curved bill that can often be seen spiraling up the largest tree trunks in the forest. They probe for insects tucked away in the bark’s crevices. They’re known to forage in similar areas as downy woodpeckers and nuthatches, sometimes meeting each other on their way up as nuthatches climb down in search of food that upward foragers have missed. Years ago, during a Christmas bird count, I saw this for the first time when a more experienced birder pointed out a brown creeper creeping up a large tree — I remember thinking, “they really do creep, and are so well camouflaged!”

Brown creepers prefer forests with large (live) trees for foraging and loose-barked (dead or dying) trees for nesting. Habitat fragmentation, clear cutting and the removal of large, dead trees are threats to their numbers. Even so, brown creeper populations are considered secure across most of Canada, though populations are vulnerable as a result of these threats in some provinces.

Did you know that brown creepers burn off about four to 10 calories a day, and by eating just one spider, the caloric intake is enough to fuel a climb up a tree of nearly 60 metres.

The fearless and curious Canada jay 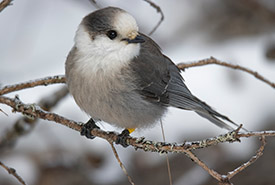 Hikers and campers may have crossed paths with this boreal peep as they are year-round residents in northern forests. Despite their cute appearance, Canada jays are fairly large songbirds, measuring 25–29 centimetres in length. They have a reputation of being opportunistic foragers, swooping into camp sites for food (giving them the nickname “camp robber”). NCC’s editorial manager recalls a face-to-face encounter with one when she was eating porridge out of a pot during a winter camping trip in Algonquin Park. A bold Canada jay landed on the edge of the pot, opposite her.

Canada jays use their sticky saliva like glue to create blobs of perishable food (more likely to stay in place in rainy or windy weather), like insects, berries and seeds, and cache them behind tree bark, lichen and coniferous tree needles. As climate change shifts the boreal forest northward, this species’ range will likely follow that shift. A study suggests that the reproductive success of populations in the southern edge of this bird’s range is affected by freeze-thaw cycles from the previous autumn, which spoil the birds’ cached food.

Canada jays are well studied in Canada, especially in Algonquin Park, Ontario. Much of what we know about this species has come from this research. In Canada, their populations are secure.

Did you know that Canada jays were renamed back to their original name in 2018, after a change in the 1950s to gray jay? Read more > 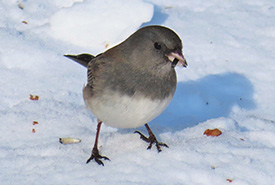 As winter sets in in places like southern Ontario and the southern prairies, you may notice the arrival of dark-eyed juncos from their breeding grounds further north. In other parts of Canada, such as the West Coast and East Coast, this species is a year-round resident.

Dark-eyed juncos are medium-sized sparrows measuring 14–16 centimetres in length with a round head, stocky bill and a long tail. They are generally slate-coloured or brown but have regional variations in colour. During breeding season, these birds use coniferous and mixed coniferous forests, and can be seen at the bottom of trees and shrubs or feeders foraging for fallen seeds during winter or migration. They can also be spotted in fields and along roadsides. 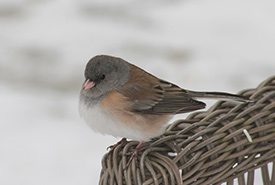 Dark-eyed juncos have variations in colour across their range. (Photo by Bryn Armstrong, CC BY 4.0)

Dark-eyed juncos are one of the most abundant forest birds in North America, yet their populations have been slowly declining across their range for several decades (threat unknown). Even so, populations are considered secure across most of Canada. 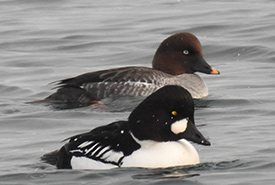 Common goldeneye male (front) and female (back) on the water in Hamilton, ON (Photo by Bonnie Kinder, CC BY-NC 4.0)

Common goldeneyes are medium-sized ducks with bright yellow eyes (males) or pale-yellow eyes (females). When flying, their wings make a whistling sound, giving them the “whistler” moniker. They breed in Canada’s boreal forests and can be spotted in winter along coastal shorelines or in inland lakes and rivers. From a distance, males appear mostly black and white and females a grayish brown. Males have a dark head with a greenish sheen and circular white patch on the cheek.

Did you know that common goldeneye chicks leave their nest (a cavity in live or dead tree, or nest box) just one day after they’ve hatched? Nests may be 12 metres off the ground, and the mother calls to her chicks from below as the young make a daring leap join her.

Common goldeneyes are numerous and their populations are secure across Canada.

Grow your own snowshoes: ruffed grouse

Ruffed grouse are small, crow-sized game birds with a triangular chest, short legs and a fan-shaped tail. Their dappled reddish-brown plumage provides good camouflage within their habitat. In winter, broad-leaved trees, such as poplars and birches, provide catkins (cylindrical flower clusters without petals that look like soft caterpillars) and buds that are staples in a grouse’s diet.

Ruffed grouse fair better in winters with abundant soft and deep snow, which provides cover and insulation from harsh weather and predators. When you’re out snowshoeing or cross-country skiing, keep an eye out for grouse tracks, roosts and droppings. Ruffed grouse may flush (fly away suddenly) if you come too close.

Did you know that during fall, ruffed grouse grow comb-like projections on the scales of their toes, called pectinations, that help them tread through snow like snowshoes? 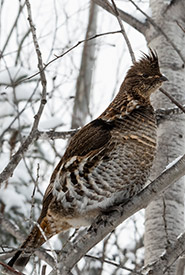 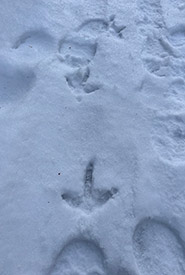 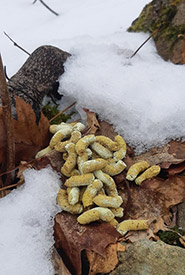 These delightful bird species are all part of an interconnected and intricately balanced food web. Together with many other plants and animals, they are important puzzle pieces in viable ecosystems across this vast landscape of which we are apart of. And this interconnection of people and nature is the Nature Conservancy of Canada's foundation. Find out more about our work across the country and how you can support us in accelerating conservation here.