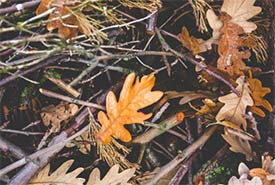 What’s your favourite part of autumn? Is it carving pumpkins for Halloween or going for long walks in the crisp air? Perhaps it’s spending time with loved ones over a hearty meal. But the main hallmark of autumn is the dramatic transformation taking place in nature. Leaves slowly change from bright green to yellow, brown, orange or red, before floating gracefully to the ground. But their life cycle doesn’t end there. Not unlike the whale fall, they support biodiversity in the afterlife by becoming nourishing leaf litter.

How do fallen leaves break down? They get a little help from their friends

Leaf litter is incredibly biodiverse! Made up of bark, twigs, plant stalks and fallen leaves, it helps maintain healthy soils by transforming into nutrient-rich mulch. But it doesn’t do this alone. Teeny tiny organisms like bacteria, fungi and invertebrates, including earthworms and soil mites, are master decomposers. 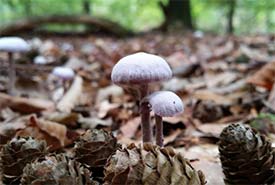 Invertebrates are species that lack a backbone, like insects. But don’t assume they lack strength of character or the will to get things done. In fact, they’re some of the hardest working species on our planet. Various species categorized under arthropods transform leaf litter into helpful chemicals and minerals that enrich soil. These benefits are then absorbed by plants, thus restarting the cycle of life. In other words, they transform dead plant matter into food for living plants. 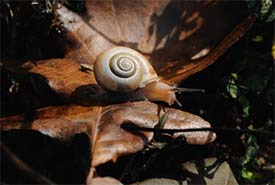 Snail on a leaf (Photo by bigwhites from Getty Images/Canva)

Decomposing leaf litter also helps store carbon. As one of the many natural climate solutions, they continue to store some of their carbon in the soil, which transform areas like our backyards and parks into carbon sinks. That’s right; the less you rake, the more you help fight climate change and save biodiversity.

How can you help biodiversity?

Become a carbon gardener! Instead of raking and removing your leaves this autumn, let them work their magic by leaving them on the ground. However, leaving a light layer is best, as thick leaf build-up can sometimes impact the growth of lawns. If it’s too thick, try putting the extra leaves in your garden. You can also build bug-a-bodes in your garden, filled with cracks and crevices, to help protect insects during the winter. Backbone or no backbone, we all need a little help from our friends.