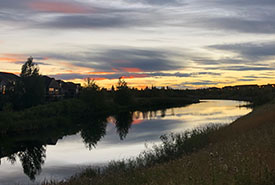 The slowing down over the past 10–11 months with the COVID-19 pandemic and its related restrictions has meant more time to be in one place and appreciate the nature around me. While where I live — McKenzie Towne, in southern Calgary — is a small, suburban, planned community, spending more time in our neighbourhood allowed my husband and I to connect with nature and watch it in all four seasons as species returned in the spring and left in the fall. Getting to know our town pond was an opportunity to become acquainted with it in a manner reminiscent of Aldo Leopold and his intimate journal of a year on his property, A Sand County Almanac.

As we settled into the first COVID-related restrictions and stuck close to home, we began daily walks around our community’s Inverness Pond. Although it is a human-made storm drainage pond rather than a natural one, our walks gave us new insights into how much life can thrive in even the smallest natural area, if given the chance. It was also a chance to get away from our screens, stretch our legs and breathe in some fresh air. 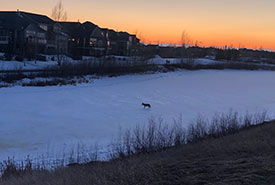 In early spring, before the thaw, we watched a coyote make its quiet way along the ice one evening as the sun set, walkers oblivious to its presence on the other side of the trees. Here and there, tracks in the snow were small calling cards of the species travelling across the snow and ice. 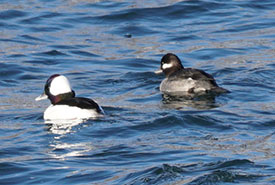 As things began to melt and spring slowly emerged in the buds on the trees and grass on the ground, we started spotting birds we’d never seen before. Little olive-sided birds, too quick and far away for us to identify, flitted through the trees. Excitedly, I saw another couple walking nearby with binoculars and called to them in an attempt to identify the birds — but they, too, were fledgling birders, still getting acquainted with bird ID but equally thrilled at how much they could see in one small area. In the pond’s open water, buffleheads spent a few weeks floating in quiet flocks before continuing their journey north to their summer breeding grounds.

Later into the season, the mergansers herded their clutch of ducklings around the pond, always with one or two small stragglers racing to catch up with their family. They cut long Vs in the water, which rippled in the sun. Occasionally, the small black head of a muskrat made its way through the water, ducking down and reappearing farther off. And if I looked closely enough by the banks, I was usually sure to spot a great blue heron. Picking up its long, skinny legs, it scanned the water, poking its long beak lightning-quick into the pond as it fished. Sometimes, it flew above the neighbourhood, its legs trailing as its large wings cut a silent path through the sky. 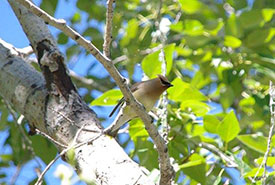 Working from home in our kitchen, where I’d set up my laptop for work, I also watched the gradual changes in our garden. As the fruit trees slowly blossomed, suddenly exploding into bloom in one week, the cedar waxwings arrived, their high-pitched whistles announcing their presence. One day, I spotted a lone waxwing in the tree just outside our window, eating the blossoms off a crabapple tree. Never having seen this behaviour before, I turned to Google and discovered that waxwings will on occasion eat apple blossoms because they are filled with nutrients. Who knew?

Our resident red-necked grebes also returned to Inverness Pond in the spring, building their mud nest out in the open. We never understood why the couple chose this spot each year, despite it not offering any shelter from storms or predators. Apparently, grebes often build two nests — a muddy one in the open, and one more sheltered near shore. Despite their return for the last few years and their determination in building this mud hump in the water, we have yet to see their brood. Some days, I could swear I saw the blue flit of a kingfisher swooping down on the water and perching onto a reed in a small bay. Occasionally, worried red-winged blackbirds kicked up a fuss near their reedy nests if someone or their dog came too close. 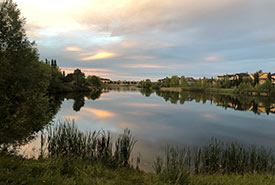 As summer matured, many of the unusual birds we’d seen and heard in spring had by then migrated through. The summer regulars were here to stay until fall. But one warm, sunny day, we were thrilled to spot three large, long-billed birds float silently by…pelicans! They are known to visit Calgary’s rivers throughout the summer, where they tend to live in large flocks. But last year and this one, a few (perhaps antisocial) birds decided to visit our pond for a few days. The distinctive bump on their noses marked them as juvenile males. Excitedly, my husband flagged down a few walkers on the trail to alert them of the white-feathered visitors. But perhaps not everyone is quite as excited as we are by these sightings. They kept walking by. 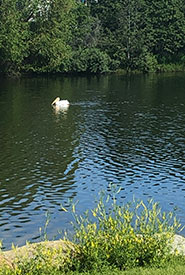 Pelican in the pond (Photo by Christine Beevis Trickett/NCC staff)

Some days, we’d hear the trill of a merlin and see it swoop over the pond, then back to the church steeple where it and its mate live. As summer progressed, we kept an eye on the duckling flocks, counting the young to see how many had survived, despite the presence of predators. As they grew into awkward youngsters, losing their downy fluff, we cheered when it seemed most of each of the three or four broods on the pond had made it. One day, I was thrilled to see a couple of loons had decided to stop by, their distinctive white necklaces and long beaks making them easily identifiable from a distance. Near the end of summer, a small, yellow-olive bird flitted from branch to branch in our backyard tree while I worked on our back deck — likely some kind of flycatcher, but certainly not a summer resident. 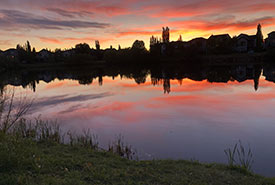 Soon, the greens of summer waned into golden fall. Lacking the sugar maples of the east, Calgary’s autumnal colours are mostly yellows, which can turn the mountains and foothills into glorious warm blankets of gold. Nevertheless, beyond the corner window of our kitchen, our mountain ash glowed a warm fiery mix of reds and oranges. Gradually, the calls of some birds, like red-winged blackbirds, began to fade as the golden leaves carpeted the ground. We kicked up leaves as we walked, enjoying their crunch underfoot. Some northern birds began to return, including buffleheads, resting in Inverness Pond’s waters before continuing their way south.

Now winter has arrived, and the red-winged blackbirds and ducks have gone, in addition to the European starlings and grackles. The neighbourhood hares, which spent all summer pretending to be grey rocks as they grazed in open fields, are now all white. The sparrows huddle in hedges, gathering in noisy, argumentative flocks to stay warm. Magpies, with their long tails, chatter away to themselves as they forage on the ground for food or hang out in trees. On warm Chinook afternoons, chickadees flit from branch to branch, seeming to sing happy songs about the day. Some mornings, looking out our home office window, I spot a solitary downy woodpecker pecking away at a city tree. And every so often, a sneaky northern flicker pecks at the side of the house. If I didn’t know they have a habit of pecking at siding, I’d think we had a ghost knocking at the walls, trying to get in.

We still continue our daily walks (most days). Getting outside, even when the weather dips below zero, is a way to embrace the winter; the more often we get out, the less biting the cold feels. Chinooks are a balm, though they do make the paths more treacherous, with their freeze/thaw, forcing us to go more slowly. Once again, animal tracks pepper the snow that blankets the ice. In the evenings, tall shadows of evergreens creep across the expanse of white. With snow reflecting on their peaks, we can often glimpse the Rocky Mountains when we walk along the eastern side of the pond. But all is not quiet. Sometimes, I spot the merlin swoop over the ice, then perch on a lamp post. Canada geese fly over the neighbourhood each morning and night, travelling from grain fields in the east to ponds and waters in the west, back and forth each day. We cheer on the lone stragglers as they race to catch up to the flock, calling out encouragement to them.

While we haven’t been able to travel east to see our families since the start of the pandemic, the last 11 months have brought with them some small, humble joys. Among them has been the pleasure of spending a year watching life come and go, change and evolve in our own neighbourhood, and the opportunity to slow down, be quiet and observe. In a few weeks, the weather will once again begin to warm, though we are likely not out of the woods yet when it comes to the snow. But soon, the red-winged blackbirds will return. And hopefully this year, I’ll be able to identify the olive-coloured birds that visited Inverness Pond last spring. Who knows what other small discoveries we’ll make, as we round the path around the pond once more?