An introduction to Ontario's snakes 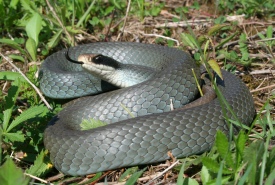 Here in Ontario, the most common snake I’ve come across is eastern gartersnake, quite often in my own backyard. Around two weeks ago, I went hiking with a friend and saw two small gartersnakes slither near the trail. While my friend immediately turned 180 degrees, ready to run without a second thought, I reached for my camera.

Snakes are often misunderstood as venomous or slimy, but here in Ontario, they are mostly harmless, never slimy and play an important role in nature. All snakes have dry, scaly skin, and there is only one type of venomous snake in Ontario: Massasauga rattlesnake. 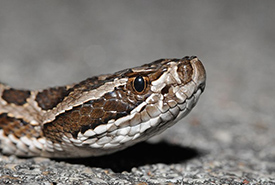 This snake is docile and avoids people. As the name suggests, it rattles its tail when threatened, but should not be confused with eastern hog-nosed snake, which also rattles, and the hog-nosed snake, which does not inject venom (although it does have mildly toxic venomous saliva to help subdue its prey). Because these snakes can look similar to non-venomous species, it’s best to look at images of different species in order to properly identify which snake is most likely to be Massasauga rattlesnake. The best way to identify a Massasauga rattlesnake is through its scales. This snake is light grey with rows of black spots along its back. Massasauga rattlesnakes are threatened in Canada. They occur only along Georgian Bay and the Bruce Peninsula, and there are very small populations in Wainfleet bog and Ojibway prairie in southwestern Ontario.

Most snakes in Ontario are smaller than 80 centimetres 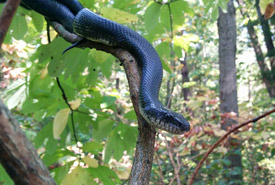 The largest snake in Ontario is gray ratsnake, also known as eastern or black ratsnake. This species can grow up to two metres long, but don’t expect this length from most snakes in the province. Out of the 16 species of snakes in Ontario, two are closely related to gartersnakes. These non-venomous snakes are generally short, with an average length of 40 to 80 centimetres. Eastern gartersnake is the most widely distributed reptile in Canada, and you’re likely to spot it even without trying. 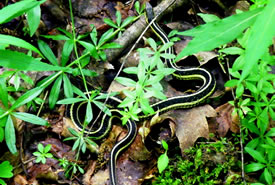 Gartersnakes are highly adaptable and can live in almost any environment, such as forests, marshes and fields. Gartersnakes are often mistakenly called “garden snakes” because of how often they are often found in gardens and grassy patches. If you’re out on a walk and see a fast-moving snake slither into the grass and out of sight, it’s most likely a harmless gartersnake. 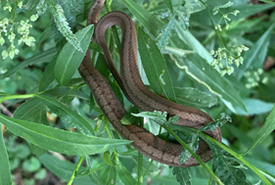 Another short species is ring-neck snake. At 12 centimetres long, this snake preys on small amphibians and salamanders. Ring-neck snake saliva also contains a weak venom: strong enough to subdue its prey, but not strong enough to harm a person. This, combined with the fact that these snakes usually avoid people, means this snake is not considered harmful to people.

Dekay’s brownsnake is also short, reaching a maximum length of 50 centimetres. This species is common throughout Ontario. Its brown-grey scales easily blend in with rocks, leaves and dirt, making it hard to spot. This species is non-venomous and mainly preys on earthworms, but has been known to eat frogs, slugs, snails and insects as well.

All large snakes are at risk 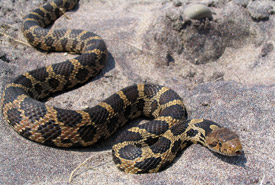 Ontario’s longest snake is gray ratsnake, at 1.9 metres. The second-longest snake in Ontario is blue racer, named for its silver-blue scales. One reason for declining snake populations is habitat loss. In Canada, blue racer snakes live only on Pelee Island, where the majority of their habitat is now protected by the Nature Conservancy of Canada (NCC) and other conservation organizations.

Eastern foxsnakes are beautiful snakes that may rattle their tails against vegetation in an attempt to scare a perceived threat away. This large, harmless snake is globally rare, existing only along the coastline of the Great Lakes. Around 70 per cent of this species’ population can be found in Ontario. 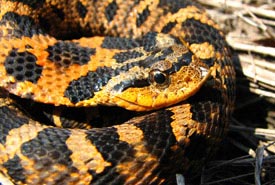 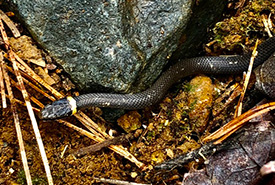 Currently, the only snake species in Ontario not at risk are Dekay’s brownsnake, common gartersnake, northern watersnake, ring-neck snake and smooth greensnake.

When I think of hibernation, my mind immediately thinks of bears. But mammals aren’t the only animals that hibernate. All snakes rely on safe shelter to make it through the chilly winter months. NCC staff have made artificial hibernacula so that these reptiles can survive the winter. Snakes hibernate until early April, usually underneath rocks or crevices in the ground below the frostline. Loss of hibernacula may be one of the reasons why gray ratsnakes are at risk.

Snakes are not nearly as scary as they may seem. In Ontario, you’re most likely to come across a harmless gartersnake. Larger snakes, such as blue racer, live only in certain areas of the province. The venomous Massasauga rattlesnake, like all snakes, prefers to avoid humans, but if you do come across one, watch it from a distance and give it its space. Snakes are also essential for maintaining ecosystem balance. When snake populations decrease, rodent populations increase. Snakes are an important part of our ecosystems, feeding on a variety of things including small mammals and amphibians, and in turn being prey to birds of prey, some waterbirds and mammals.

Unfortunately, these reptiles are often misunderstood and killed out of fear. As with all wildlife, give snakes space. Never approach or harass wildlife, and never be tempted to handle reptiles, turtles or amphibians unless absolutely necessary to remove them from a road or similar danger. Whether a snake is venomous or not, it’s best to keep your distance and let them carry on with their business. 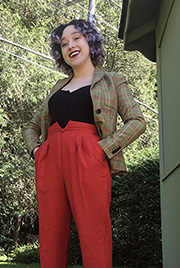