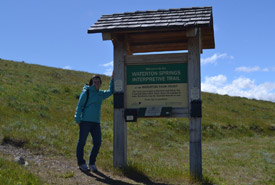 This year I celebrated 15 years of working for the Atlantic Region of the Nature Conservancy of Canada (NCC). To mark the occasion, I visited a completely different NCC Region: Alberta. Ah, the mountains! Seeing the difference in landscape, land management and accomplishments was a great way to add a new dimension to my NCC experience.

I joined the Atlantic Region of NCC, working out of the regional office in Fredericton, New Brunswick, as a youngish and keen recent biology graduate student. As I have worked my way up from project assistant to director of stewardship, I have seen huge changes in the organization. Over the last 15 years, we have grown into one of the largest land conservation organizations in the country. We have gone from less than 100 employees to over 250, exponentially increased the amount of land conserved (now up to 2.8 million acres/1.1 million hectares), and have developed solid, science-based procedures to guide our work. 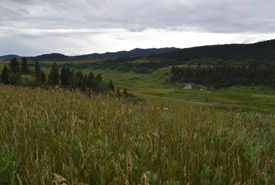 I decided to visit the Alberta Region, specifically the southwest corner, where I could bask in the shadow of the Rockies and enjoy the sharp divide between them and the native prairie below. My obsession with mountains is perhaps understandable, given the tallest one in the Maritimes is in New Brunswick along the ancient Appalachian range. It stands at 820 metres, compared to the young Canadian Rockies’ highest point of over 3,700 metres.

I started my adventure by signing up to be a Conservation Volunteer for a fence removal event the Alberta Region was hosting on the Waldron Ranch. I had heard about this amazing project, where more than 30,000 acres (12,140 hectares) of native grassland and forest is under conservation agreement with NCC, and I wanted to see it for myself. To put it into perspective, in the Atlantic Region we have helped protect 70,000 acres (28,330 hectares) in four provinces, so having that amount of contiguous conserved land is impressive. Due to earlier historic settlement and the way property has been divided, you won’t find such large blocks of private land out east! 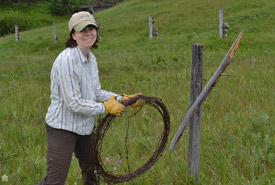 I enjoyed my day removing old barred wire fencing to prevent injury to wildlife and I met three people there with ties to Nova Scotia…small world! I particularly enjoyed the background talk given by the ranch manager talking about native vs. tamed prairie, and how once it has been converted it is impossible to get back. I was struck by how different the grassland ecosystem is that developed with the grazing pressure from bison, such that we need to have cattle present to prevent succession. In this area, having a working landscape such as ranching is necessary to maintain the ecological processes. The idea that you want to prevent trees from seeding in is such a foreign idea to me. In New Brunswick, I have run Conservation Volunteers events to plant trees. We want them to spread into cleared areas. 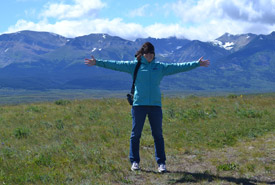 The next stop on my journey was a visit to the Waterton Park Front – another large NCC project at the base of the Rockies. My family and I visited NCC’s interpretive centre and the short Waterton Spring interpretive trail. We timed our late June trip perfectly, as the prairie wildflowers were all in bloom. We had fun identifying the unfamiliar plants along the trail with stunning Rockies views. It was a very different experience from our NCC Johnson’s Mills Shorebird Interpretive Centre back home, which highlights our rocky beach and mudflat coastal area and the shorebirds that come through to feed during their late summer migration. 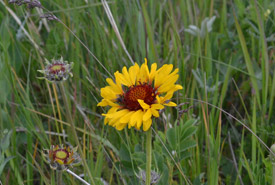 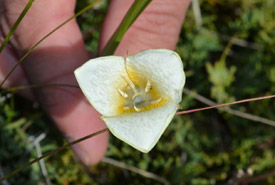 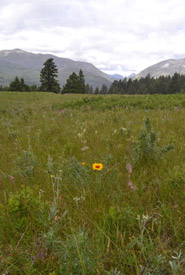 My final self-imposed task was to visit a few of the Crowsnest Pass NCC properties. With advice from the NCC natural area manager for southwest Alberta, I got directions to find the properties and the location of the grizzly bear den on one of the properties, which I was careful to avoid. That was also an eye-opener – having to be aware of not just black bears, but grizzlies too! I also had to be aware of whether access was allowed, as some properties have active grazing. I found that different here too – in the Atlantic provinces, all vacant land is open for hunting and passive access, unless otherwise posted, but in Alberta landowners have to specifically grant permission.

All in all, I found my 15th anniversary trip eye-opening, both due to the incredible mountain views (did I mention I loved the mountains?) and exploring a different NCC region with different ecosystems and management. Here’s to the next 15 years! Sláinte!