A walk in the woods: Montane forest 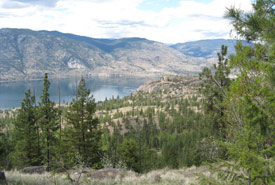 Skaha Bluffs, BC (Photo by NCC)

I grew up in Williams Lake, British Columbia; it's a place known for ranching, logging, milling and mining. It’s also known for wide, open spaces, forests as far as the eye can see, sparkling lakes and wild rivers. My parents, who hailed from farms in Manitoba, loved the land, and nurtured this connection in us kids by raising us steeped in nature. We grew up camping, ice fishing, cross-country skiing, swimming, berry picking, hunting, bird watching and so much more. And all of these adventures were set in the gorgeous, mysterious montane forests that surrounded Williams Lake.

The montane forest region in British Columbia extends from the central to southern interior of the province. Open Douglas-fir and pinegrass forests with lodgepole pine, trembling aspen and white spruce characterize the central portions, while ponderosa pine and bluebunch wheatgrass woodlands are more common in the south.

What's a compie?
A compie's job is to take a compass bearing along the prescribed direction for installing inventory plots. Compies have to walk along a perfectly straight bearing, regardless of what might be in the way. They also run the "chain," which is a tool for measuring distance.

My first summer job was in the montane forests west of Williams Lake. I was hired as a lowly "compie" (short for compassman) on a BC Forest Service inventory crew. We were stationed in a tent camp at Bull Canyon, west of Alexis Creek along the Chilcotin River. That summer in the forest, I learned how to use a compass, measure distance in chains, take a DBH (diameter at breast height), determine tree height, estimate crown closure, change a tire, winch a vehicle out of the mud, double shift a Jeep, climb a tree to set up the radio and fly around in helicopters — all basic necessities in the Cariboo forests. 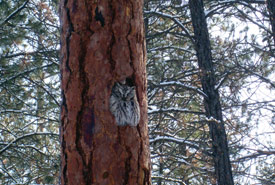 I spent long days traversing Douglas-fir forests, trying to learn how to whistle, mostly to pass time and let wildlife know I was in the area as I walked along while establishing inventory plots. I was in awe of the magnificent beauty of the monumental "vets”: the ancient firs of that landscape. They were so big, and so old. They commanded reverence and honour. They had provided life to so many over the centuries: nesting perches for songbirds, raptors and owls, shelter for deer and bears. The ever-present chatter of chipmunks reminded me that the animals are the real owners of these ancient trees.

The thick and deeply grooved bark of these venerable trees protected them from the frequent ground fires that helped form the landscape. To this day, when I smell a warm, dry forest in the summer, it takes me right back to Williams Lake and all the time I spent in those awesome forested lands. 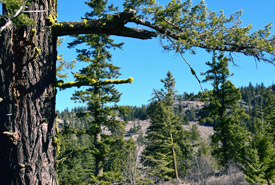 My work with the Nature Conservancy of Canada (NCC) as the conservation program director brings me to the low elevation areas of the southern interior of British Columbia, where grassland conservation is a focus. However, lying within easy reach are the dry forests that hug the grasslands. The dry, open forests are ever-present on rising slopes, covering the hills and mountain tops, providing another critical element in the rich mosaic of ecosystems that sustain the myriad rare and endangered species that live here. These forests hold snow into the warm spring and feed streams and wetlands that supply the arid grasslands with vital moisture.

Much of the montane forest region has been altered through harvesting, development, fragmentation and the suppression of fire. The forests in this area are precious and worth conserving.

The experiences and knowledge gained in montane forests gave me an understanding and appreciation of the diversity and connectivity of ecosystems across a landscape. I became comfortable in nature, in all kinds of conditions and in all of its wildness. These aptitudes serve me well today, as I endeavour to conserve biodiversity and inform others about the work of NCC.

Any time I spend in the forests that NCC has conserved, I am reminded of happy times with family and of the importance of NCC's work here.

I continue to be amazed and impressed by the enduring presence of these forests, even after working in them for more than three decades. And even after all these years, I am still trying to learn how to whistle. 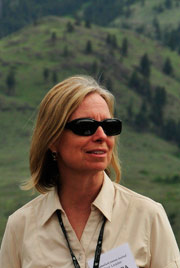