A walk in the woods: Nebo in the boreal forest region 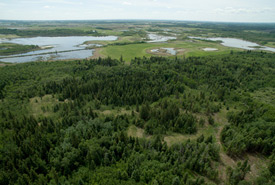 Remember that scene in Stand By Me, where our intrepid heroes set out on their journey towards adulthood along the railway track of life and chase a bunch of cows off the rail bed and into the pasture beside it? No?

How about the scene where the narrator, a plucky late-30-something teenager with nothing but a bedroll, cell phone, iPad, cruiser’s vest, multiple-pliers, water bottle and easy access to a pick-up truck, wanders from the railway into the dark forest dotted with enticing wetlands (swimming holes?), and makes the grisly discovery of a…deer skull? 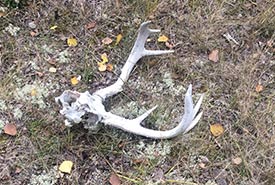 It’s a moment that really shapes our teenage (okay, fine, 39-year-old) hero. It’s also when he realizes that the property he and many others worked so hard to secure really is a cool chunk of funky forest.

No, hey? Okay, well maybe I’ve been reliving too many of my childhood favourites as I monitor properties and maybe you’ve spent too much of your time not thinking about the forests of Saskatchewan. Well, that’s about to change because walking through the Nature Conservancy of Canada’s (NCC’s) newest project near Ordale, Saskatchewan (but called Nebo because it is near the community of Mount Nebo) is like walking through the story of Saskatchewan’s boreal forests.

So, sling on your bedroll, pack up your comic books and stop worrying about leeches because we're going for a walk in the woods.

During National Forest Week NCC’s communications ace in Saskatchewan, Tiffany Cassidy, and I got to tell local media outlets how great the Nebo project was. We stayed around after they left to explore the farthest reaches of the property. 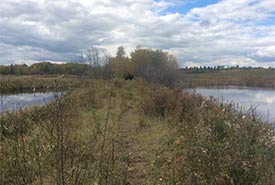 I didn’t tell Tiffany about the Stand By Me connection, but I think it was obvious once we got ourselves onto the abandoned railway bed that cuts through the southern half of the property that we were on a journey of growth and discovery. I digress! The old rail bed was a perfect path for us and everyone else using the property. 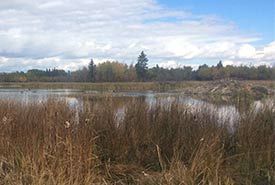 We saw beaver and muskrat trails leading off into the adjacent wetlands, ducks and more ducks on those wetlands, ungulate (hoofed mammal) tracks of many varieties, and the cows that graze on a portion of the property (they didn’t seem too happy to be discovered, but they moseyed on). Oh, and we also discovered that the local bears really like choke cherries. I’ll let you guess what was left behind by the bear that tipped us off.

So, this little, overgrown animal highway through the wet area of the property brought us (and everyone and everything else) to where the trees got thicker and the light grew dimmer, and then thinner and lighter and then back down to a bit darker. 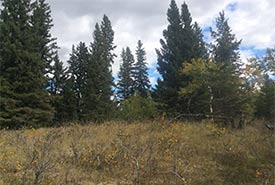 There was a lot of variety in this forest because it is not all the same age, species or soil. This is where I got off the railway, abandoned Tiffany to her own adventure and discovered that just like the boys in the movie who were expecting a straight trip to discover a…okay, never mind. I was expecting a typical boreal forest or at least a boreal transition forest. I thought I’d find, in the back corner of the property, a mixture of stands of mature aspen and white spruce with fairly thick understory of beaked hazelnut and snowberry. I did find that, but I found just about everything else in between as well. 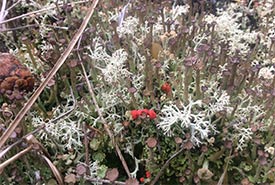 Miniature forest of lichen carpets the ground (Photo by NCC)

The property sits on some very sandy soils, and portions of the property have the feel of rolling sand hills. These sand hills are now stabilized by a relatively thin but tenacious layer of dry-adapted prairie grasses and shrubs. The landscape is also covered by fairly short and branchy aspen that spreads, however timidly, over a thick, miniature forest of lichen that totally deadened the sound of my footsteps.

Those parts of the forest were open and easy to walk through; a real treat for this grassland-loving walker. 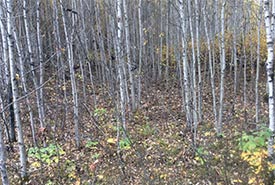 As I ambled on, I came across areas of young aspen growing so closely together as to make walking difficult. These patches had towering (for Saskatchewan) white spruce on the edge and scattered throughout.

Farther north, I found more spruce mixed in with taller aspen and clumps of birch. Here, the grasses tended to include rough-leaved rice grass and the leggier reed grasses. The wetlands didn’t have many ducks on them, but they were lovely.

As you move even more north on the property, where the soil is more productive, previous logging operations become evident. Here, more solid stands of spruce once stood, and will stand again as natural succession and land management combine to return trees to these areas. 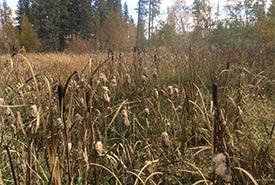 It is not far enough from the forest to the road and adjacent farm land, but the somewhat jarring transition back to open fields of wheat and canola reminds me why it is important to conserve these diverse forest habitats in this mix of farm, wetland and forest. Over the years the trees at Nebo will grow and die, the animals will come and go. Hikers, bird watchers, hunters and many others will find their own adventures on and off of the paths at Nebo.

Someone will find species we haven’t recorded and probably evidence of past use. Maybe you’ll get a chance to plant a tree out there with us or just watch the ducks and geese. The journey of discovery and conservation has just begun.

Now it's your turn to explore and discover, get lost and tell stories, make friends and have adventures. Just make sure you bring your bear spray.