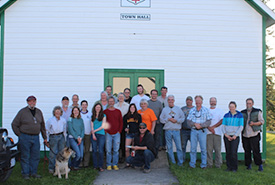 Our team of expert naturalists and Cockburn Islanders outside the Tolsmaville Town Hall on Cockburn Island, May 30th (photo courtesy of Maria Diebolt).

The Nature Conservancy of Canada (NCC) recently acquired land on a beautiful and remote island just west of Manitoulin Island in Lake Huron called Cockburn Island. Because of its remoteness, relatively little information about the biological diversity of Cockburn Island had been documented. For example, we knew from locals that there were northern watersnakes on the island and there were past records of smooth greensnakes, green frogs and apparently larger-than-normal, "giant" American toads.

But what other snakes, frogs or salamanders inhabit the island? What other species had we not discovered on the island? 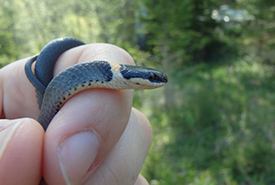 To increase our baseline knowledge of the island’s biological diversity, at the end of May, NCC enlisted a veritable dream team of 10 expert Ontario naturalists and islanders with local knowledge to conduct a biological inventory. NCC’s Cockburn Island lands comprise a whopping 50 per cent of the entire island, measuring 22,331 acres (9,037 hectares) in all, so this was no small undertaking!
Over the course of three days our team scoured the forest, wetland, alvar and shoreline habitats of the island to identify and document everything from amphibians and reptiles to birds, plants, lichens, butterflies, dragonflies, snails and slugs.

The trip was NCC’s first major collaborative research undertaking with our local partner, the Cockburn Island Sports and Conservation Club. Islanders also generously donated their time, knowledge and island vehicles to the cause, taxiing us and our team around the island, taking us to all their favourite Cockburn haunts and natural hotspots and helping us with surveys. 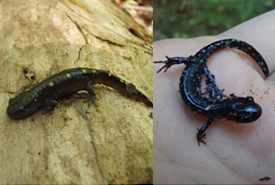 Highlights from the trip included:

We also spotted many rare species of birds and plants, including:

We also observed many of the so-called giant Cockburn American toads. In fact, a small group of us decided to put the apparent large size of the Cockburn toads to the test scientifically. We drove the dirt roads of Cockburn during the night to find the larger than normal toads. Over the course of two night surveys, we caught, sexed, weighed, measured and released over 150 large toads. We’ll use this data to compare the sizes of Cockburn Island toads to mainland toads to find out if our suspicions of their large size are, in fact, reality.

For the next several months we’ll be collecting everyone’s data and summarizing it into a report that we will provide to trip funders, the islanders of Cockburn and provincial databases like the Ontario Reptile and Amphibian Atlas and the Natural Heritage Information Centre. Of course, we’ll also be adding all the new information to NCC’s own databases so it may be used in NCC’s future conservation planning and stewardship for Cockburn.