At home on the tundra: Why I fell in love with the Arctic landscape 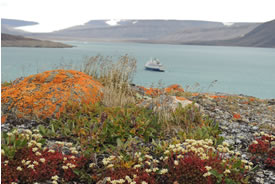 If you’ve never had the opportunity to visit the Arctic tundra, perhaps your first moments will compare to mine. When I stepped off the plane in Iqaluit, Nunavut in 1999, I knew immediately that I would call this place home. The landscape was unlike any I had ever encountered and it was love at first sight.

That love has never waned, although after 12 years Nova Scotia is now home.

The beauty of the Nunavut landscape in the summer months lies in the cross between the starkness on a grand scale with low rolling hills to higher peaks, rocks and boulders strewn about the tundra and the minute spectacle of plant life at your feet. From a distance when you look out across the land, you don’t get a sense of the diversity of the plant life. What you think you see is a stark, treeless, barren-looking panorama. As you get closer to the land itself, sprinklings of colour appear. And when you are immersed in the tundra, your feet planted firmly on the ground, you will find that there are blossoms everywhere you look. It’s hard not to feel guilty as you walk and put your foot down on one plant after another.

There are about 360 flowering plants in Nunavut. This includes grasses, sedges and the small willow and birch trees, along with the perennial herbs. Despite the harsh weather conditions, the short growing season, the lack of precipitation and the nutrient-poor soil, many plants survive and thrive due to their unique adaptations to life in the North. For instance, purple saxifrage, the territorial flower of Nunavut, has succulent leaves to preserve water, grows close to the ground where it is warmer (up to 20 degrees warmer) and forms compact, aerodynamic cushions as protection from the wind and fast-moving, wind-blown particles. The delicate Arctic poppies are heliotropic, meaning the blossoms follow the sun as it moves across the sky, thus keeping their reproductive parts warm. To survive, plants need to reproduce and the adaptations very much reflect this.

Story continues below the slideshow.

The trees in Nunavut (only birch, willow and alder) are reduced in size and often decumbent (lying along the ground and partially curving up). Willows have new buds ready in the fall to get a jumpstart on the next year’s growing season and birch reproduce asexually, thereby reducing their dependency on wind for pollination or the need for a longer growing season during which their seeds could germinate.

It is difficult to predict what effect climate change will have on these highly adapted plant species. One of the worrisome problems in populated areas is the introduction of non-endemic species of plants (species not local to an area). In the past, a variety of species of grasses have been introduced around Iqaluit. Although none of these grasses seem to be problematic at the moment, some of them have managed to survive. With the onset of warmer weather, they could possibly displace some of the endemic plants, thereby disrupting the natural biodiversity of the area. People have planted some Icelandic poppies and these do seem to be thriving. Although they are beautiful, my fear is that they will take over the habitat currently inhabited by the endemic Arctic poppy, and that would be a shame.

As shepherds of the land, I believe it is our collective responsibility to protect our natural environments and the biodiversity within. The Arctic tundra is a delicate ecosystem that takes years to recover from ATV treads or snowmobile tracks. It would be nice to see dedicated areas for these activities, so that we can all enjoy unspoiled tundra around the communities in which we live. 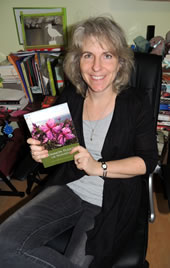 Carolyn Mallory Carolyn is a writer, whose book Common Insects of Nunavut was published in December 2011.