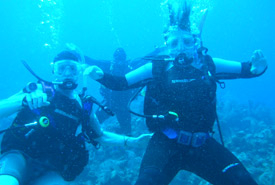 Last May my dad and I took a trip down to the beautiful country of Belize for a diving trip. Once at the docks off of Belize City, we had a two-hour boat ride we arrived at the Blackbird Caye of the Turneffe Atoll.

Two days later on our second day of diving, we went to the south east end of the atoll. We dove down more than 100 feet below the surface and slowly swam back up. We saw many fish along the way, but the most exciting part was seeing the loggerhead turtle.

Loggerhead turtles are extremely large sea turtles that can grow to be nearly 300 pounds. Named for their wide heads, they live throughout most temperate and tropical areas of the Atlantic, Indian and Pacific oceans. They can be several feet long and have a brown colouration.

Having only seen green sea turtles previously, I was in awe of the turtle's size and shape. This one swam along ahead of us for a short little while, a remora (suckerfish) stuck to its back. Once it swam off into the distance, we began our ascent to the surface.

Coming up from the dive, all of the divers were buzzing with excitement. The dive masters started telling us about another loggerhead named Barnacle Bill. He was apparently the largest turtle that lived around the atoll and was often seen in this area.

As we waited on the surface eating fruit and discussing loggerhead turtles, the hour flew by. We were all anxiouus to get back in the water, hopeful to find the now iconic turtle.

This time as we dove down once again to the ocean floor, all eyes were out for Barnacle Bill. We swam around, seeing a barracuda and other reef fish all around. While taking a picture of a lobster sitting under the coral, I heard the dive master yell (as well as he could, with a regulator in his mouth).

Turning to look at him, I saw the dive master pointing up above me. I quickly flipped onto my back and was immediately stunned. Directly above me was the largest turtle I have ever seen. It was Barnacle Bill himself! 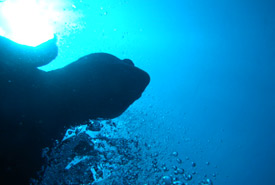 I quickly took a snapshot of Bill as he swam over top of me. I was absolutely amazed by his size and grace for such a large creature. As he slowly moved ahead of me, we all slowly followed along behind him. It was clear why he was called Barnacle Bill; his shell was covered in barnacles. When he finally swam off into the distance, we turned back around and started our way back towards the boat.

Throughout the rest of the trip we did see other turtles — a few green and some hawksbill sea turtles but no other loggerheads. The trip was filled with so many amazing moments, but I will never forget swimming below Barnacle Bill. His size and grace was something I had never before seen in a turtle. 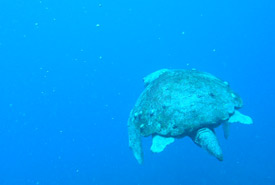 This close encounter made me really appreciate how precious these creatures are and how important it is to do our best to help make an effort to protect them. Loggerhead turtles live such long, beautiful lives and bring such joy to so many people in the world.

This once-in-a-lifetime experience has truly helped me realize how valuable these creatures are and appreciate them even more than I did before. They are the true gentle and amazing reptiles of the ocean.

Katie Cascadden is currently going into her fourth year of a biological science at the University of Calgary.