Birds of Old Man on His Back 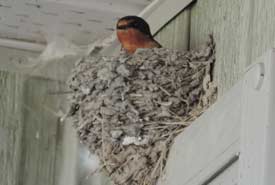 I moved to southwestern Saskatchewan in 1969 when I married a farmer/rancher whose land adjoins the Old Man on His Back Prairie Heritage and Conservation Area (OMB) on the south side. As a newcomer to the prairie, I had lots of fun learning about that lifestyle! It was totally different, coming from England as a registered nurse. I've always been interested in history and I wanted to know all about where I now lived, worked and played.

Ever since I started working as an interpreter for Nature Conservancy of Canada's (NCC's) interpretation centre at OMB in 2006, when it was built and opened, I have learned a whole lot more about this region. I meet many interesting people “up at the buffalo camp” — that's OMB, for those who don't talk about farming! It's a joy to be there and learn about the daily doings of our many wildlife species and to watch the progression of the wild plants that grow there too.

Over the years we've had a steady progression of barn swallows, among the other birds there. This year, mom and dad barn swallow started building their nest about three weeks ago. They must have reasoned that if all these visitors come to the OMB area and go into the interpretive center there, it must be a great place to nest and make their home! This has been a favourite nesting place for swallows ever since 2006.

Two weeks ago the nest was done and momma barn swallow was hanging around the OMB interpretive centre, watchful and close to the building. This past weekend, she was sitting on the nest despite many interruptions with the comings and goings of visitors, including summer students who help Dr. Kevin Ellison of the World Wildlife Fund, conduct research at OMB.

The dad barn swallow takes his turn on the nest, too.

OMB is the home for a few bird species such as Sprague's pipit and chestnut-collared longspur that are not so common in other places, but we are fortunate enough to have many. Sprague's pipit, when disturbed if you walk too close to it, flies straight up into the sky, singing as it goes until you can no longer see it. Chestnut-collared longspur on the other hand almost looks as though it should be a sparrow… Until you look closely and see the collar-like chestnut marking around the back and some of the side of its neck.

This is the reason why researcher Kevin Ellison has spent his last six summers here. His research is mufti-faceted, comparing the grazing habits of bison with that of cows and what effect they have on the life of grassland bird species.

We often have a summer student for six to eight weeks to help out in the field. The student's work includes gathering information about the birds' nests, which in the case of these two species are built in the ground, such as materials used to make them. About two years ago, every nest the student looked at had bison wool used in it — maybe only a hair or two, but it is used. 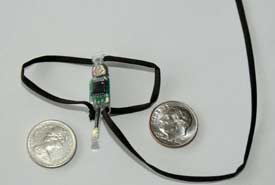 Kevin is also trying to define where these birds go in the winter by placinglocators are placed on individuals from these two species. The geolocators are like tiny back packs, with elastic that fits around each wing. When the birds return to within 30 feet of the same spot the following year (yes, they really do — this totally amazed me!) the geolocators are removed and sent to the lab in England. There they can determine from the hours of daylight recorded by these tiny instruments where the birds went.

Before I thought of writing this blog post, I took a pic of momma barn swallow on a Saturday morning. I couldn't see the eggs, as she was sitting on them. However, I recall I took a really neat photo last summer when a momma barn swallow hatched four eggs, in the same place, but in a different nest. Let's hope we see the same this year. Wonder if it's a different mum this year as she flies off her nest without too much distraction and last year's mum just watched all the comings and goings from on high. 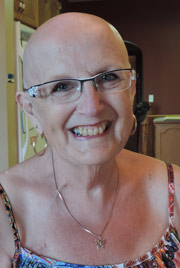 Sue Dumontel was an interpreter at Old Man on His Back Prairie and Heritage Conservation Area in Saskatchewan.