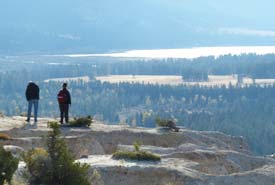 Canada’s  greatest contribution to sustaining our planet’s biodiversity and ecological services may very well be our abundance. From some of the world’s largest intact forests and wetlands, to wild northern rivers, to spectacles of bird and mammal migrations, Canada is one of only a handful of countries with true wilderness and wild spaces remaining. 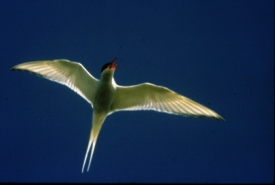 Canadians have over a century of experience in creating and managing big protected areas. The results are impressive. Within six percent of the planet’s terrestrial real estate and with less than half a percent of the world’s population, Canada and Canadians own and manage one-quarter of the world’s largest and best protected parks. These parks protect birds whose flight patterns stretch across the Americas, marine life that knows no boundaries and planetary cycles we all depend upon.

Some of the places Canadians have protected reflect our generous geography and our cultural kinship to wilderness. But many of our larger parks are difficult to access and unfortunately remain unknown, and uncelebrated, by Canadians. Parks so large they still contain wildlife that rarely encounters humans; parks so large that the ebb and flow of natural processes still continues. Parks that at over one million hectares (10,000 square kilometres) could each easily fit Prince Edward Island (5,660 square kilometres) or the Greater Toronto Area (7,124 square kilometres) within their boundaries.

Million-hectare parks, by the numbers

Million-hectare parks that meet international standards for protected areas are rare gems in a world where nature is fading. Globally, there are fewer than 125 land-based parks of this size that are officially recognized. The number drops to less than 80 if only parks with the most strict, long-term levels of protection are considered. The U.S. has only four parks measuring one million-plus-hectares, and they are all in Alaska (the Arctic Wildlife Refuge is the largest protected area in North America, but it does not have the same level of protection as Canada’s largest parks). 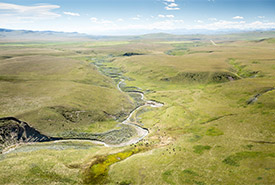 Although size isn’t everything when it comes to protected areas, scientists have long recognized the importance of large, intact nature reserves. While small nature reserves are still very much needed, and are critically important for protecting some species and habitats (especially in fragmented ecosystems), large protected areas are essential to conserve species that need lots of space and to sustain ecological processes. There is no magic number or ecological threshold on how big a park should be, but based on scientific evidence, at least 500,000 hectares is a size that seems to be sufficient to protect populations of most resident species and key ecological processes. Canada has 20 parks that are more than double this size.

Canadians have a long and rich history of creating protected areas with a global impact. Our largest parks have an ecology that influences the health of the planet, and a grandeur that sparks  imagination, story and the Canadian identity. These are places that ensure our spring and autumn skies will be filled with waterfowl and shorebirds; places that moderate our climate and clean water; places where we can assure our children that wild and wilderness are still real.

These places are an impressive legacy, but a legacy that is incomplete. As Canadians we need to examine the conservation needs in other parts of our country to ensure all habitats are protected.

By nature of our geography and southern settlement, most of our biggest parks will be in the north, but there are still opportunities to create protected areas in our prairies and temperate forests. 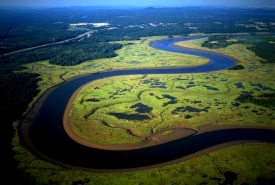 Parks, even really big parks, don’t function in isolation. Their health and conservation effectiveness are often as dependent on activities outside of park boundaries as they are on management inside the park. Many of Canada’s parks need to be linked to ensure functional networks of protected areas. The Nature Conservancy of Canada has helped conserve many properties that are building these networks, including areas around Waterton Lakes National Park, Riding Mountain National Park, Lake Superior National Marine Conservation Area and the Musquash Estuary Marine Protected Area.

Seizing the opportunity for conservation

Canadians still have an opportunity for planet-changing conservation. We are one of the few countries left with large areas that CAN be protected. We are a generation that can endow a legacy of wildlife spectacles, natural abundance and much-needed ecological security of our planet’s life-support systems. 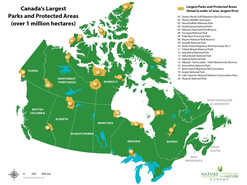 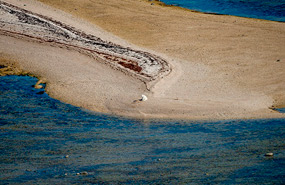 Wapusk National Park is one of two massive parks that have been established in Hudson Bay Lowlands, the world’s third- largest wetland area. While the park is renowned for its polar bears, it also protects diverse coastal habitats, including salt marshes and sand dunes (yes, this is Manitoba!). 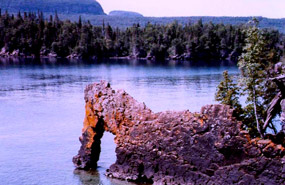 Lake Superior National Marine Conservation Area is the largest freshwater protected area on the planet. Occupying over one-third of Lake Superior, this park protects remote islands, relic populations of Arctic plants, and some of the last true wilderness remaining on the Great Lakes. 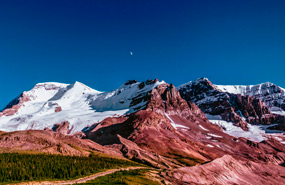 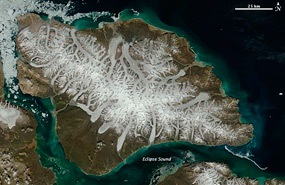 Nunavut has more protected areas that exceed a million hectares than any other region of Canada. The Bylot Island Migratory Bird Sanctuary protects important nesting grounds of seabirds and greater snow geese. Approximately 350,000 thick-billed murres and black-legged kittiwakes nest on the island’s cliffs. 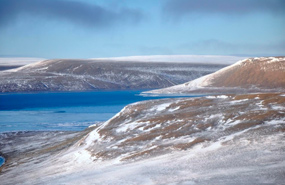 This latest addition to Canada’s system of national parks protects key wildlife habitat for many Arctic species, including muskox, polar bear and narwhal, and nesting colonies of waterfowl and seabirds. Qausuittuq National Park also protects migration routes, calving areas and wintering grounds for the endemic peary caribou. At over 11,000 square kilometres, Qausuittuq National Park is just larger than the country of Jamaica. 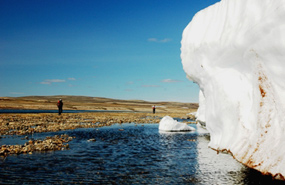 Aulavik National Park protects vast areas of arctic lowlands on the north end of Banks Island. This pristine arctic environment supports Peary caribou and the highest density of muskox in the world. 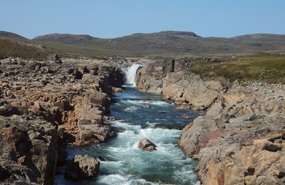 Arctic tundra meets Canadian Shield in this northern park. The landscape is characterized by low tundra vegetation with scattered trees in the river valleys.  The coastal areas and wetlands of Ukkusiksalik National Park are rich in wildlife, including polar bear, barren-ground grizzly bear, caribou, muskox and millions of nesting birds. 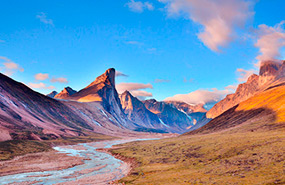 Located on Baffin Island in the Arctic Cordillera, Auyuittuq National Park is dominated by majestic sheer mountain cliffs, glaciers and river valley meadows. The park straddles the Arctic Circle and includes deep fjords and coastal habitats that are home to polar bear, narwhal and beluga. 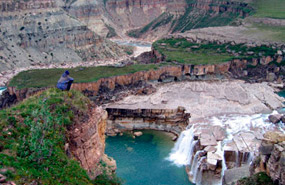 This migratory bird sanctuary was established to protect the nesting grounds of over 500,000 lesser snow geese that migrate to the region’s deltas and ponds to nest. In addition, thousands of king eiders, long-tailed ducks, tundra swans, Ross’s geese and sandhill cranes nest and raise their young in the sanctuary. 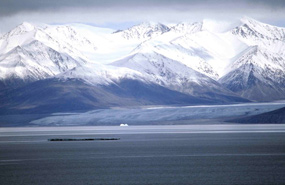 Sirmilik National Park is home to the most diverse bird community in the high Arctic and supports thousands of nesting waterfowl, seabirds and shorebirds. Much of the park is covered by high mountain peaks and glaciers with extensive plains of low-lying tundra. One of the most unique features are the red sandstone hoodoos of the Borden Peninsula. 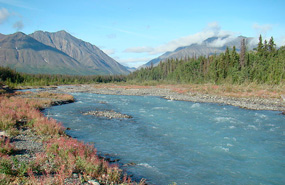 Ontario’s largest protected area, Polar Bear Provincial Park is located in the Hudson Bay Lowlands. In addition to protecting immense wetlands and marine coasts, the park provides summer habitat for the world’s most southerly population of polar bear. The bears live on the coast during the summer, and migrate onto the sea ice of James Bay during the winter. Black bear, moose, woodland caribou and beluga can also be found in the park. 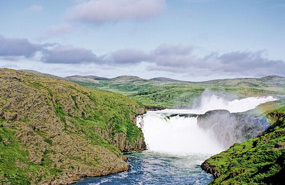 Quebec’s largest protected area, Parc national Tursujuq is located along the shore of Hudson Bay. The park includes two large lakes, Tasiujaq and Wiyâshâkimî, which were both formed by meteorite craters. Lakes in the park protect the endangered Lacs des Loups Marins freshwater seal (a sub-species of the harbour seal). Other wildlife includes black bear, moose, wolverine and Canada lynx. 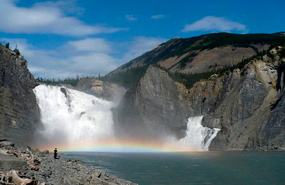 Protecting one of the most spectacular wild rivers in North America, the Nahanni River, this National Park includes mountains, deep canyons, caves, waterfalls and sulphur hots springs.  The park protects many species of wildlife, including Dall sheep and mountain goat, and is designated as a UNESCO World Heritage Site.  It is the only place in the world to find the Nahanni aster, a rare endemic plant that grows near the park’s thermal springs. 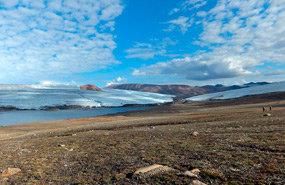 Located on the northeastern corner of Ellesmere Island in Canada’s high arctic, Quttinirpaaq (meaning “top of the world”) National Park is the second most northerly park in the world (first place goes to Northeast Greenland National Park). This is rugged arctic dominated by high peaks and glaciers and is the domain of the polar bear, Arctic wolf and muskox. 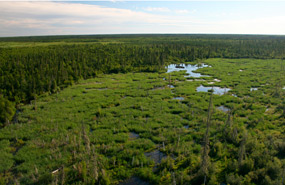 Wood Buffalo National Park straddles the border of Alberta and the Northwest Territories, and is one of Canada’s oldest mega-parks. Originally established to protect herds of wood bison, the park also contains the last remaining natural nesting area for the endangered whooping crane and the Peace-Athabasca Delta, one of the largest inland freshwater deltas in the world. Wood Buffalo National Park is the world’s largest, fully protected forested area. 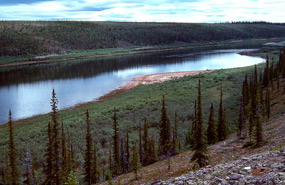 Thelon Wildlife Sanctuary is one of northern Canada’s oldest protected areas and was established to protect the then dwindling population of muskox. The sanctuary is an important nesting area for waterfowl, the calving grounds for the Beverly and Bathurst caribou herds and home to the barren-ground grizzly bear. 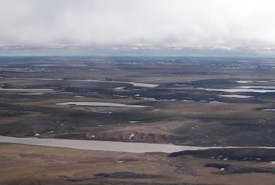 Canada’s largest protected area is a little known migratory bird sanctuary established to protect one of North America’s most important areas for geese to nest and raise their young.  The sanctuary supports 90 percent of the world’s population of Ross’s goose, and millions of other waterfowl and shorebirds. The Queen Maud Gulf Migratory Bird Sanctuary is larger than the country of Costa Rica, and is recognized under the Ramsar Convention as the world’s second largest Wetland of International Importance.

Posted in: Land Use, Conservation