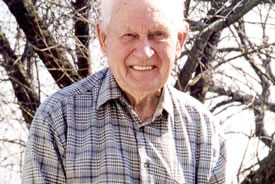 The deerfly and mosquito whirl was unrelenting under 90 degrees of humidity. I was walking with two land appraisers deep into the Minesing Wetlands. We were wading through waist-high ostrich ferns through a cedar swamp, searching for the boundaries of the 180 acres (73 hectares) belonging to the late Clarence Smith.

The appraisers carried four cans of OFF between them. I admired their well-practised technique of reaching for a can, spraying face and neck and dropping it back in pocket in a fluid motion. Not a word, not a step missed. It was mid-June in the swamp and pausing, even for a moment, was bad business for anyone other than the deerflies. Appraising wetlands, where survey markers sink, can be a challenge, but we were there to fulfill Clarence's wish that this land would be protected in perpetuity.

Minesing is an ecologically rich, self-possessed and shifting landscape. Clarence Smith, a lifelong naturalist, knew just how important it was to keep this place natural. Thanks to Clarence and his family, it still is. 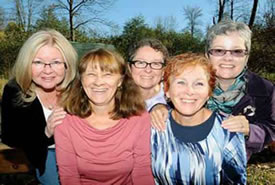 I first met Rhona and Roxy, two of Clarence’s five daughters, in a Cookstown, Ontario coffee shop. Clarence had recently passed away and in his will he wished to see his wetland property become a nature reserve. He was deeply connected these lands — he had been born, and 104 years later passed away, in the Smith family farmhouse just steps away.

From my conversations with Rhona and her sisters emerged a story: a multi-generational testimony about care and legacy stemming from lives lived in a common place.

Rhona and her sisters worked with NCC to create a plan for seeing their father’s land become a nature reserve as he had wished and in the end, they decided to donate a portion of the appraised value in tribute to Clarence’s vision.

Theirs was a life lived deeply in place and they came by it naturally. Clarence's great-grandfather, Eugene Smith, or the "Old Oak," as he was called, had arrived in nearby Utopia, Ontario in 1845, fleeing the Irish potato famine. He raised his family on the farm, a place well-documented by his son. Thomas, a determined diarist, wrote down the details of his days, family, crops and weather on the potato farm he and his wife built. Each page speaks to the details of the home farm; stories deeply rooted to the acres that provided subsistence through growing food for family and market, pasture for livestock or logging for firewood and barn building.

“The diaries speak to a strong love of land. They were tied to the land,” said Rhona. “They were very poor but the land gave them everything.”

It was on the farm settled by the Old Oak that Clarence Smith lived, farmed and raised his own family. In later years, he became known to his family as the Old Maple.

“He was a solid man and he had huge hands,” added Rhona. “Those hands were his life.”

Love, respect and curiosity about the natural world were inherent to Clarence’s character and he imparted these traits to his five daughters.

“My father had a real love of land, trees, family and dogs,” reflected Rhona. “He used to take us on nature walks, teaching us the difference between coniferous and deciduous trees or how to identify a maple from a cedar for example. We spent hours exploring, playing in the stream that ran through the farm and nearby woods,” she added. 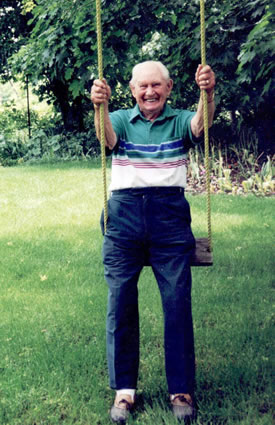 As Clarence knew, conserving this wetland property would ensure the protection of wintering, molting, breeding and staging areas for many birds, including large numbers of waterfowl such as American black duck, Canada goose, red-breasted merganser and northern pintail. Other rare species such as least bittern and Midland painted turtles will also benefit from an expanding protected area stretching outwards from the confluence of the Mad and Nottawasaga Rivers, where they meet and flow towards the big waters of southern Georgian Bay.

Minesing Wetlands was as much Clarence’s habitat as all other species depending upon it. He walked and watched and came to recognize its role in nature over a lifetime. 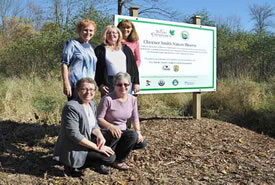 I was honoured to join all of the Smith sisters, staff from NCC and the Nottawasaga Valley Conservation Authority and many members of the extended Smith family under a blue bright sky on October 9, 2013 to celebrate their father, his love of nature and the unveiling of the Clarence Smith Nature Reserve, adding to the Minesing Wetlands complex.

It’s magical to witness a dream come true, especially when the dreamer is represented by their loved ones.

As Peter Forbes says: “I am that alchemy of land, people and story.” We are all a unique alchemy — our personal stories are rooted in place and in particular landscapes. If we are lucky, we find a sense of belonging, of home within them, as did Clarence Smith and his family.

Minesing Wetlands, seeping out from the shores of the Nottawasaga and Mad Rivers, is one of the largest and most undisturbed in southern Ontario at 16,000 acres (6,475 hectares). Globally celebrated, it’s a meeting place for boreal and Carolinian species like cerulean warbler and home to the Hine's emerald — the only dragonfly protected by the federal Endangered Species Act in the United States and a species not previously documented in Canada. Minesing provides habitat to 28 federally listed species at risk. To help care for the Minesing Wetlands please visit www.conservationvolunteers.ca for volunteer opportunities within the wetland such as dragonfly and butterfly monitoring and stream bank stabilization. 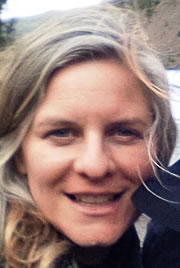