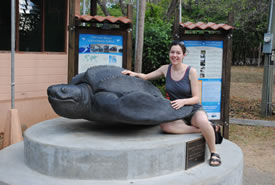 We rushed down the dark beach, illuminated only by the moonlight, and struggled to keep up in the deep sand. Aside from the gentle lapping of the ocean waves to our right, everything was quiet. Our group moved forward, silent with anticipation.

The call had just come in on the radio, after we had waited for hours on benches outside Costa Rica’s Marino Las Baulas National Park office: a single turtle had emerged from the sea to nest.

Finally, our volunteer leaders slowed their pace and motioned for us to stay together and keep quiet. A massive form, planted solidly (as you’d expect of something weighing well over 500 pounds) appeared in the darkness before us on the cool sand.

There, in front of us at last, was one of the largest turtles in the world: a leatherback sea turtle.

It is hard to believe that the eggs this leatherback sea turtle was laying on that tropical Costa Rican beach might someday be giant turtles like their mother, swimming gracefully through the world’s vast oceans. It is even harder to believe that some of their kin (of the west Pacific population) may travel thousands of kilometres north into Canadian waters.

Two distinct subpopulations of leatherback sea turtles swim in Canadian waters: the Northwest Atlantic subpopulation’s range extends from its nesting sites in the southeastern United States, Caribbean and northern South America all the way north to Newfoundland. This population has an estimated 10,000 females nesting each year and is thought to be relatively stable.  It is currently listed on the International Union for Conservation of Nature (IUCN) Red List of Threatened Species as "least concern" — the lowest category on the scale of extinction risk.

The West Pacific subpopulation, on the other hand, which ranges from its nesting sites in southeast Asia all the way north to the seas of Japan and China and across the pacific to the coastline of British Columbia, is listed as "critically endangered." This listing is as dire as it sounds; it is the highest category on the scale of extinction risk before a species is listed as "extinct in the wild."  The West Pacific subpopulation is thought to only have 1,438 mature individuals remaining. 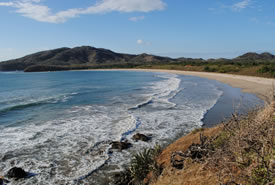 Conservation efforts to protect leatherback sea turtles in areas like Costa Rica, where the leatherback sea turtles nest, and in Canada, where the turtles swim in the depths of the ocean offshore, are vastly different. At their nesting beaches, female turtles, their eggs and hatchling turtles are all vulnerable. Nesting sites have been developed or polluted by lights that disorient the hatchlings. Female turtles and their eggs may be harvested for food by humans, and the hatchling turtles are at risk of predation by all manner of opportunistic animals.

At sea, on the other hand, the turtles are vulnerable to being killed as by-catch in commercial fisheries (e.g. on long-lines) or by eating garbage such as plastic bags or balloons, which can resemble the turtles’ jellyfish prey floating in the water.

I felt so lucky to get the chance to see a pacific leatherback sea turtle nesting. She was the only one that came up onto the beach that week. Although only the luckiest of us ever get to see these amazing creatures anywhere in the world let alone in the vast waters off the Canadian coast, it’s important to remember that our actions here contribute to global efforts to conserve these ancient sea-farers.