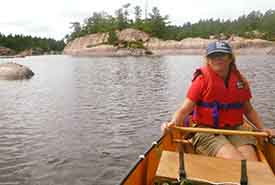 This story is about my experiences on and personal connections to what is now known as the French River, in Ontario. Long before European settlers came, this area was occupied by Indigenous Peoples. The original caretakers of the land, this is the traditional territory of the Odawa First Nations, Anishnaabeg Nation and Huron-Wendat Nation. I also recognize the contributions of Métis Nation, Inuit and other Indigenous Peoples have made, both in shaping and strengthening the land here.

For centuries, the canoe has been a mode of transportation for Indigenous Peoples. During the time of European settlement, it was a key vehicle for exploration and the fur trade. French Canadian voyageurs would leave their farms or homes to spend months paddling — from before sunup until after sundown — in fleets of canoes.

Voyageurs would have paddled deep into the country, then back to trading posts. Their days were grueling; paddling long hours, eating very basic foods (salt pork, beans or pemmican for breakfast, lunch and dinner) and using their canoes as shelter when they finally stopped for the night. Voyageurs might have padded up to 18 hours a day, at seven to nine kilometres an hour.

As the fur trade declined in the 19th century, the canoe was adopted by recreationists and campers as a way to connect with and experience Canada’s natural places, both near and far.

For my father and me, the canoe has been a much more pleasurable experience (for the most part, except for on exceptionally long, hot portages) than it must have been for the voyageurs. Almost every summer for the last 12 years, we’ve spent time exploring lakes and rivers in Nova Scotia, Ontario, Alberta and British Columbia. Our annual canoe trips have been an opportunity to spend time together, explore new landscapes and slow down. 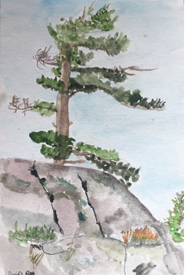 In the last few years, our daily paddles and portages have become shorter. We’ve discovered the pleasures of setting up camp early and enjoying the afternoon — often reading or painting by the shore, or resting under the shade of a tree.

Little did we know that my connection to the canoe went not only beyond our annual summer trips, but all the way back to the 1600s.

Last summer, we paddled the French River, intending to reach the Old Voyageur and Voyageur channels, which lead into Georgian Bay. But winds off the bay kept us at our campsite for a day, and when they died down, we turned around without making it to our destination point. It wasn’t until we returned home and spoke of our trip to my uncle that we learned that had we made it to the channels, we’d have been dipping our paddles in the same waters as my ancestor Jean Pelletier (a relation on my mother’s side) had, centuries before.

Jean Pelletier had travelled to Quebec from France, and he had been a donné (someone who gave their time to the church) with the Jesuits. From what we can tell, he’d become disillusioned with the Jesuits and abandoned them to return to Quebec in 1646, as part of a flotilla of 80 voyageur canoes. They would have made their way down the French River, to the Old Voyageur and Voyageur channels and into Georgian Bay.

This summer, my dad and I returned to the French River. We paddled west to the channels. As my bones creaked and my muscles groaned on the first few days, I couldn’t help but think that my ancestor and his canoe-mates would have paddled far longer hours in much more difficult conditions. Thinking about our modern camping gear and well-planned eight-day menu, we were paddling in the lap of luxury.

And then on day three of our trip, we made our way down the western channel, often referring to our map and compass until we found two small channels, measuring just slightly wider than the width of our canoe. I can’t imagine how a voyageur canoe, likely much wider than ours, would have fit in this narrow enclosure. But turning the canoe around so my dad could take a photo of me in front of the channels, I felt connected to the landscape, and my family, in a special way.

Once again, we decided to turn around rather than press on to Georgian Bay, not knowing what the winds would be like once we got there. Our canoe easily gets blown around with the slightest breath of wind, so we weren’t looking forward to fighting gusts and getting nowhere.

We set up camp at a nearby site. We spent the next five days on the river, waking up when the sun rose and when the birds and squirrels woke us with their chirps, eating a leisurely breakfast, packing up camp and heading off to our next destination, only a couple of hours away. I can’t help but feel a little guilty at how leisurely our days were, compared to what Jean must have experienced.

But these trips are an important reminder to me of just how fast our day-to-day work lives are. The first day on the river, I usually find myself impatient to get to the next destination. My shoulders and back groan under the unusual strain, and it feels like we’ll never reach it. Setting up camp feels laboured, and I feel out of synch with the camping life. It takes about three days to truly slow down, to find the rhythm in our paddle strokes and find ease. Unlike Jean and the voyageurs, our canoe trips are an escape from the hustle and bustle of daily life, which for them would have been the hustle and bustle of 80 canoes on the river. 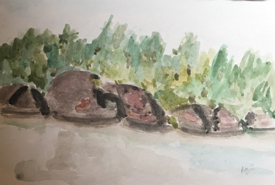 My painting on day two (Painting by Christine Beevis-Trickett)

Looking back at my paintings, I can see the busyness in them fade away the longer we were on the river. My painting on day two seems hurried, a rapid impression of a landscape in movement. By days five and six, I’ve learned how to slow down again — to take time to really see the land around me, and to enjoy the experience of painting while sitting under a tree by the river.

The meaning of the canoe has changed from what it was for Jean and his contemporaries, let alone the Indigenous Peoples to whom we owe its creation. But I’m ever grateful that my dad and I have found a connection through it, and have created priceless memories on our trips. We are fortunate enough to still enjoy these special places, much as my ancestor might have, more than 300 years ago.