December roundup: Conservation and nature stories from around the world that caught our eye this month 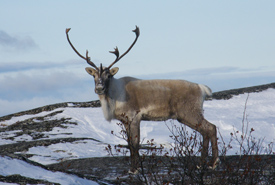 Every day, countless inspiring and informative stories are published about conservation successes or discoveries in nature and wildlife around the world. Here are some that caught our attention in December 2018.

Reindeer crash at the North Pole

A new study concludes that Arctic caribou populations (known as reindeer in their European range) have dropped by half in the past 20 years.

Light up the story >

The effects of global warming continue to intensify in the Arctic, as 2018 proves to be the hottest year since 2013 and the second-hottest year on record.

Break into the story >

The 24th annual United Nations Climate Change Conference in Poland concluded with a firm plan for putting the Paris climate agreement into practice.

After a decade of research, scientists describe a new species of giant salamander that is native to the wetlands of Alabama and Florida.

Slip into the story >

For the first time in almost five years, a healthy specimen of the critically endangered Atlantic whitefish has turned up in Nova Scotia.

Turtles in the big city

Forests on the cutting edge

Conservationists in northeastern North America are working to combat a tick infestation that has caused a significant risk to moose populations throughout the region.

A bounty of deep sea corals

Almost 200 species of Great Barrier Reef corals have been found surviving in the deep waters off the coast of Australia.

The Cree Nation, in collaboration with the Nature Conservancy of Canada, has identified 80,000 km2 of its territory in northern Quebec for conservation.

Map out the story >