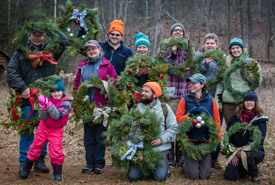 Conservation Volunteers at the Deck the Halls event, 2015 (Photo by Nick Tardiff)

As typical Canadian Decembers go, this wasn’t one of them. The landscape at the Nature Conservancy of Canada's Rice Lake Plains property was shrouded in fog, without a snowflake in sight.

The volunteers’ task for the day was to remove Scot’s pine, an invasive species in the Rice Lake Plains in Ontario. Although the temperatures were unseasonably warm, the holiday spirt was alive and well. With Christmas around the corner, anyone in need of a Christmas tree was welcome to take a Scot’s pine tree home. Those wanting Christmas wreaths would be treated to an arts and crafts session following the day’s activities.

The removal of Scot’s pine, a fast-growing tree, will help restore the tall grass prairie on the property to a more natural state while allowing for native species to flourish. Scot’s pine was first introduced into this environment as a way to restore the forest after the native trees had been logged.

"Quite some time ago, a lot of the trees had been removed and this had turned into a sandy kind of wasteland," says Mark Stabb, the central Ontario program director for NCC.

As the morning wore on and the sun began to poke through the fog, the depth of this prairie landscape was slowly revealed. Watching staff and Conservation Volunteers go about their business removing the Scot’s pine, I began to realize how far I could actually see. The tall grasses and soft rolling hills of the Rice Lake Plains definitely brought back memories of my younger days, living in Saskatchewan.

After a successful morning of plucking Scot’s pine, it was time to head back to the barn for lunch. There was chilli, snacks and hot chocolate for everyone. I, for one, was especially happy to see that as I had forgotten my lunch in my refrigerator at home. Some took advantage of their lunch hour to sit about, eat and engage in conversation, while others were preoccupied with strapping their Christmas tree booty to their cars.

As the lunch hour was nearing an end, tables, chairs and Christmas decorations were brought out in preparation for the day’s next activity. Jennifer McCarter, NCC’s conservation coordinator in Ontario, encouraged everyone to tune into their inner Martha Stewart, as it was wreath making time. Mark Stabb, being a good sport, agreed to be Jennifer’s wreath-making apprentice, as she explained some of the finer points of wreath-making 101.

In the end, it was a very successful day. We helped give the Rice Lake Plains a fighting chance to restore itself to a natural state, while celebrating some festive cheer with fellow nature lovers. 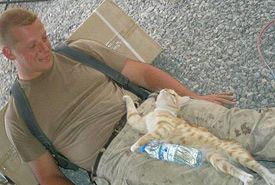 Nick Tardif is a freelance photographer and photojournalist specializing in nature and nature related issues, with a special focus on species at risk.