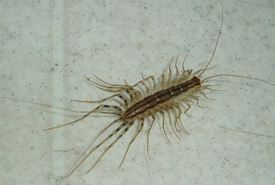 Before starting in communications I had a successful career as a bug doctor. I had a nice little set-up on the playground of my elementary school where I would take bugs cut up by classmates and nurse them back to health. I wasn’t top in my profession and had a low success rate but alas, I was the best we had.

One day a friend of mine brought a new patient to the "clinic" and it was the first time I had ever laid eyes on a centipede. I was afraid but little did I know they're actually amazing creatures.

There are approximately 2,500 species of centipedes in the world, 70 of which are found in Canada and Alaska. Centipedes and millipedes are examples of arthropods that have more than four pairs of legs, which helps to differentiate them from those species in the class Insecta, which have only three pairs of legs.

Centipedes and millipedes can be distinguished by the number of pairs of legs per body segment: centipedes have one while millipedes have two pairs. Most commonly encountered indoors are non-native house centipedes, which are usually yellowish-grey in appearance with 15 (yes, 15) pairs of legs. They are not dangerous to our health though they can induce a painful bite. Although all centipedes are equipped with poisonous glands, bites are uncommon and only induce temporary, localized pain.

But they're not all bad. Arthropods like the centipede are important insect controls, breaking down organic matter and recycling nutrients.

So although they may appear unattractive, there is a lot of good underneath that crunchy exterior. Even with its environmental advantages, those tiny little legs on that last patient were enough to make retire from the bug medical field. Since the day I hung up my stethoscope, I have always been afraid centipedes.