Whether you are hiding from the summer heat in an air-conditioned building or warming up by the fire on a blustery winter evening, you will surely agree that Canada’s climate is quite variable. From hot, dry summers to cold, snowy winters, we humans need some shelter from the harsh environment. Many species, too, have evolved ingenious survival techniques for seeking refuge from harsh Canadian climates. One particular dragonfly takes on an especially risky and important journey every cold winter and dry summer.

The Hine’s emerald is a rare and endangered dragonfly known to exist in only one Canadian location: the Minesing Wetlands in Ontario. This medium-sized dragonfly is a beautiful work of nature, as it undergoes a magnificent transformation: this insect with brilliant bright-green eyes, metallic green thorax and two lateral yellow stripes starts its life as a small, drab, beetle-like larva. The larvae must survive for three to five years of hot, dry summers and freezing cold winters before emerging as an adult. 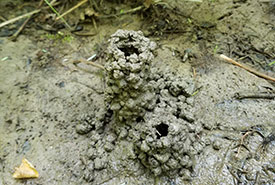 By sharing digger crayfish burrows during periods of freezing and extreme drought, the Hine’s emerald dragonfly larvae is able to mature, emerge from the water and, in a matter of hours, transform into a beautiful aerial predator.

Digger crayfish burrows are intricate underground networks of tunnels and caverns dug into wetlands, wet roadside ditches, temporary bodies of water and creek banks. The burrows are as deep as the groundwater, and the surface openings often have a chimney or mound made of excavated mud. However, seeking refuge in another species’ home isn’t all sunshine and buttercups. Digger crayfish are known to feed on insect larvae, and may eat any Hine’s emerald dragonfly larvae that they stumble across inside their burrow.

Overall, it’s a tough life for the Hine’s emerald dragonfly at all stages of life. To add to the very real, natural hazards this species faces, humans are causing them problems too. Much of the species' larval wetland habitat has been destroyed to make way for urban and industrial development. In fact, around 70 per cent of Ontario’s original wetlands have been lost to development.

Ideal Hine’s emerald dragonfly habitat features spring-fed shallow water, so any development that decreases the amount or quality of groundwater that flows to the dragonfly’s habitat threatens its survival. Contamination of wetlands by pesticides and other pollutants also poses a threat. 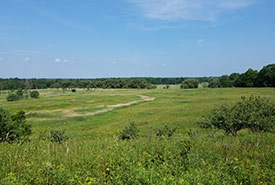 Patrick W.E. Hodgson Property in the Minesing Wetlands, ON (Photo by NCC)

The Nature Conservancy of Canada (NCC) recently acquired a 107-acre (43-hectare) property in the Minesing Wetlands, known as the Patrick W. E. Hodgson Property. This was conserved thanks to the generous support of many donors, including the Government of Canada, through the Natural Areas Conservation Program, and The Patrick Hodgson Family Foundation. The Nottawasaga Valley Conservation Authority has also been a key partner in our work in Minesing. Ontario Power Generation and Bruce Power have also been important supporters of our restoration work in the area.

This ex-agricultural field includes several Hine’s emerald dragonfly habitat types: a wet meadow for adult males and a dry meadow for adult females, both of which are connected to spring-fed marshes and surrounded by forests that are perfect for roosting and perching. The hedgerows between the agricultural fields contain small creeks where digger crayfish burrows have been found. These hedgerows are perfect habitat for the rare and elusive Hine’s emerald.

Not only is protecting this dragonfly important for conserving our nation’s natural legacy and adding beauty to our world, but dragonflies play an important role as water quality watchdogs. As adults, they catch and eat small flying insects, like mosquitoes. In their immature stage, they provide food for larger aquatic animals, such as fish and crayfish.

The interdependency of the digger crayfish and the Hine’s emerald dragonfly represents a beautiful act of sharing in the natural world. I believe we can learn so much from the natural world, and perhaps we should take a page from the diggers crayfish’s book: tolerating and sharing our own resources may foster the growth of something beautiful and rare. 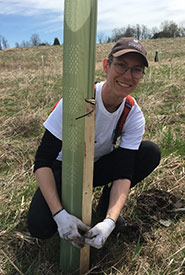 Aidan O'Brien joined the NCC team as a Conservation Technician in April 2018.