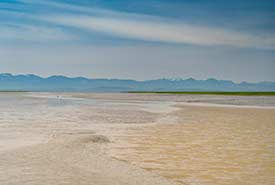 Low tide at Swishwash Island, BC. (Photo by Fernando Lessa)

The Fraser River is one of the most important rivers in Canada. Its waters, running for almost 1,400 kilometres before reaching the Pacific Ocean, are a major salmon waterway that is used by all five species of Pacific salmon and salmonids to reach their spawning grounds.

The Fraser River Delta — where the river’s fresh water meets the cold Pacific waters — is a key area for many species of animals. Situated between Tsawwassen and Vancouver, BC, the dynamic estuary landscape is very flat and dominated by marshes. More recently, the surrounding areas have been converted into farmlands and industrial developments, like Vancouver Ports Terminals and the Vancouver International Airport.

The intertidal marsh ecosystem, fed by the nutrients carried down the river and from the rich ocean water, is especially important for wild salmon during their migration to the ocean, and for the thousands of birds that use the area for resting, nesting and feeding during their annual migrations.

Swishwash Island is sandwiched in between Sea Island — where the Vancouver International Airport is located — and Terra Nova Rural Park in Richmond, BC, in the central arm of the lower Fraser River Estuary. The island is a sanctuary for nature and is owned by the Nature Conservancy of Canada (NCC). It is used by migratory and resident wildlife, including species like snow goose, bald eagle and great blue heron. Juvenile salmon gather in the intertidal marsh for shelter before migrating to the open ocean.

The chance for me to visit the island came in early May 2020, while working on my next book project called The Soul of the Fraser, a collection of three books produced with BCIT/Rivers Institute, featuring the beauty and ecological importance of the Fraser River.

After connecting with NCC and getting permission to visit the area and install a few camera traps, I started planning my excursion. The goal was to kayak around the island and set up the cameras. After three days, I would come back, explore the island on foot and collect the cameras. Expectations were especially high, due to recent sightings of white-faced ibis. 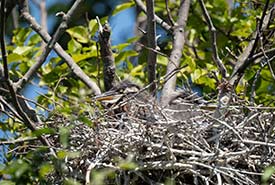 Accessing the island is not hard, and within a few minutes of paddling I was already on the east side of the island looking for animals and birds. Despite being so close to an urban environment, the island is a natural heaven. Visitors must be granted permission to access the island because of the sensitivity of its habitat and nesting grounds. The animals have it all for themselves: great blue herons nesting a few feet from the group, Anna's hummingbirds coming to check you out all the time (it’s breeding season and males are very territorial) and animal tracks all over the place. Coyotes, otters and many other small animals seem to use the area often.

River otters are very social animals. Here one poses for the camera while the other takes a nap. (Photo by Fernando Lessa)

The uniqueness of Swishwash was revealed a few days later when I came back to check the camera traps. I discovered a family of river otters had been playing in front of the cameras, resulting in some unique documentation of these social animals. 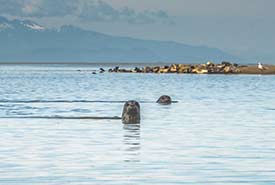 Harbor seals take advantage of the low tide and rest in the sandbanks around Swishwash Island. (Photo by Fernando Lessa)

While paddling around the island, I noticed an amazing group of harbour seals warming in the sun on the west side of the island. I photographed them using a long zoom lens in order not to disturb the females with their young.

At low tide, I spent time checking tide pools. These special places are used by many fishes and crustaceans to hide from predators. They are also used by bigger animals looking for an easy meal.

Estuaries are important ecosystems. They provide food and shelter for animals and are considered especially important in protecting the landscape from erosion created by climate change. Unfortunately, estuaries can be overlooked by many nature lovers. They may not be as pretty as an old-growth forest at first sight, but I encourage anyone who wants to discover the many secrets of this dynamic landscape to get out to an estuary and see first-hand how many species live there. 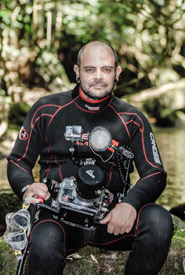